I have repeatedly and will continue to say that America is NOT a “Christian Nation.” If we were we would be a Theocracy, ruled by God, instaed the Founding Fathers decided on a new experiment in rule, so we are a Republic. However for those who would invoke the non-existent separation of church and state clause, we were founded upon, guided by and designed to follow Judaeo-Christian laws and principles.

“It was enough to melt a heart of stone,” remarked John Adams after the First Prayer in Congress. 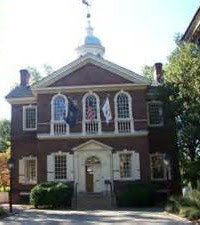 The First Session of the First Continental Congress opened in September of 1774 with a prayer in Carpenter’s Hall, Philadelphia.