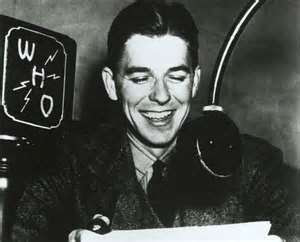 A graduate of Eureka College, IL, 1932, he worked as a lifeguard, having 77 rescues.

He then announced for radio stations in Iowa.

He became a sports announcer for WHO radio, covering Chicago Cubs baseball games, and then traveled with the team.

While with the Cubs in California, Ronald Reagan auditioned with Warner Brothers, landing a contract doing “B films.”

He was a Captain in the U.S. Army Air Corps during World War II.