With all the BS, LIES and MINUTIA being passed around on Social media and other platforms regarding the Police I thought some facts were in order. 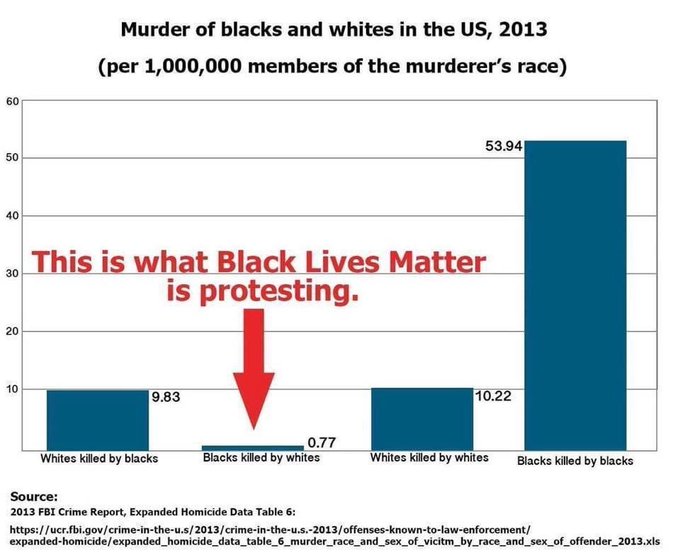 A few days ago I also posted this article: A Statistical Breakdown On The Case Against ‘Systemic Police Racism’

In which the following can be found:

In 2019 police officers fatally shot 1,004 people, most of whom were armed or otherwise dangerous. African-Americans were about a quarter of those killed by cops last year (235), a ratio that has remained stable since 2015. That share of black victims is less than what the black crime rate would predict, since police shootings are a function of how often officers encounter armed and violent suspects. In 2018, the latest year for which such data have been published, African-Americans made up 53% of known homicide offenders in the U.S. and commit about 60% of robberies, though they are 13% of the population.

The police fatally shot nine unarmed blacks and 19 unarmed whites in 2019, according to a Washington Post database, down from 38 and 32, respectively, in 2015. The Post defines “unarmed” broadly to include such cases as a suspect in Newark, N.J., who had a loaded handgun in his car during a police chase. In 2018 there were 7,407 black homicide victims. Assuming a comparable number of victims last year, those nine unarmed black victims of police shootings represent 0.1% of all African-Americans killed in 2019. By contrast, a police officer is 18½ times more likely to be killed by a black male than an unarmed black male is to be killed by a police officer.

Mac Donald further highlights violence that was committed against blacks over the weekend in Chicago and notes that the reason that blacks die from homicide at a rate 8X higher than whites and Latinos combined is not because of the police, but because of crime.

Is there Police Violence, sure, but as the stats show it is rare. It is also something we should expect as long as men and women are human and sinful creatures they can possibly succumb to the evil in their hearts. No one, not even law enforcement officers are perfect, and neither are those pointing fingers at them and surely not those acting out in a violent riotous manner.

The big difference an entire community (or groups in various cities) band together and react violently against an isolated incident of an evil cop and the media and many politicians see it as a good thing. Lets us change the scenario and what if, the cops banded together and went on a violent rampage every-time one of their own was murdered, how would the media and politicians react then. Yeah I didn’t think so!