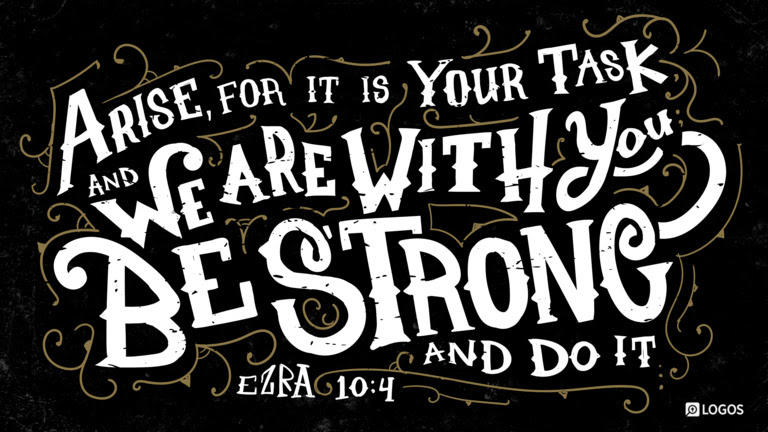 One of the most Iconic, trademarked (an unbiblical) slogans of all time is Nike’s “Just Do It!”  I say unbiblical because Nike implores folks to, as the slogan suggests, Just do things, consequences be damned.  Of course they have denied this over the years but their advertising campaigns have left little to the imagination or doubt of any true Christian scholar.

The Bible on the other hand does implore us at various places to “DO IT.”  Not just anything but something very specific. Lets break it down an example using our text for today:

To understand Ezra 10 we need to look back at Ezra 9:10-15 where Ezra pleads with God confessing the Sins of Israel.

Chapter 10 opens v.1-3 with Ezra, still in the temple with the priests and Levites continuing to pray and confess before God. Finally making a covenant with God to obey His commandments in v.3.

In our text we find the command to “Do It”

Arise, Note the humble posture Ezra had assumed when praying and confessing sins before God. While I am not implying this position is a requirement (being prone or kneeling) humility certainly is.

for it is your task, What task has been mentioned so far? Go back and read Chapter 9 and 10 did you see it? No, it is an implied task, Ezra confessed a lawlessness among the people of Israel, and His task was to remind them of their need to be obedient to the Law of God.

and we are with you;  Specifically this is speaking of the priests and Levites who were there with Ezra in the temple. By implication God, who promises to be with and never forsake His children. An important lesson here is no man is a ministry unto himself.

be strong and do it.” Unlike the “Just do it” slogan Ezra has much more to go on. He is encouraged to be strong, why because God, the priests and Levites, and in this case even King Artaxerxes whom has granted Ezra the right to be in Jerusalem.  Further He is to “DO IT” the task laid out before Him in the temple and commissioned by God. No Nike slogan can attest to that.

For the True Christian it is NEVER a matter of “Just Do[ing] It.”   We all have an ability,  gift, talent, God has given us to serve others. Yet we are not to randomly chose on own own.

Just as each one of you has received a special gift [a spiritual talent, an ability graciously given by God], employ it in serving one another as [is appropriate for] good stewards of God’s multi-faceted grace [faithfully using the diverse, varied gifts and abilities granted to Christians by God’s unmerited favor].

We do not set out on our own accord to Just accomplish something, we humbly and prayerfully seek God’s authority and commission prior to any action we propose. Only when we have confirmation that this is what God desires for us do we “DO IT!”