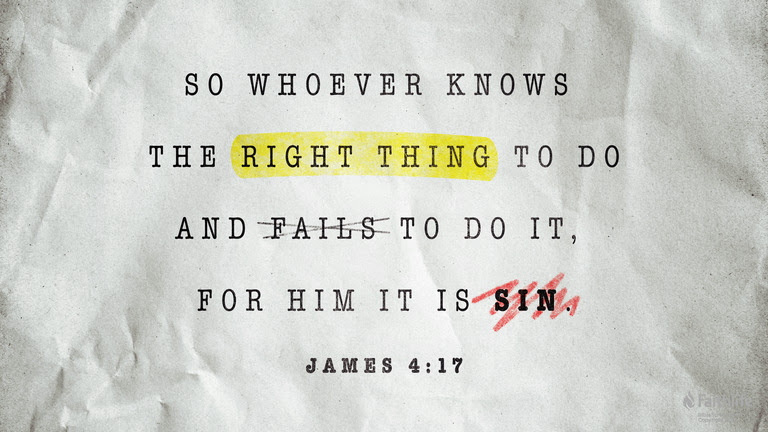 In yesterday’s devotional I used a verse from the book of Ezra (10:4) to expound on the differences between the worldly “Just Do It” and the Godly “Do It” callings.

Today in our text we are going to look at another verse, this time from the New Testament that requires people to “Do It!”

Our text closes out Chapter 4 of the Epistle of James. Depending on what version/translation you have there may be a heading describing the theme of the closing verses (v.13-17) like:

CSB: Our Will and God’s Will

NKJV: Do Not Boast About Tomorrow

In verses 13-16 we I think a combination of the CSB and either the ESV or NKJV titles work best. A simplified breakdown shows that James is using the example of lethargic lazy people v.13, who will gladly put off today that which can be done tomorrow. He points out that in our finite minds we do not know the future v.14, What is your life? calling life nothing more than a mist or vapor.

Verse 15 maybe one of the greatest advice lines ever written: Instead [of being that lethargic lazy fool] you ought to say, “If the Lord wills, we will live and do this or that.” Instead v.16 you boast in your self glory.

So –  A very powerful directive two letter word. Meaning considering all I have said before this, the only logical conclusion we can draw from it is…

whoever knows – while some will argue this is applicable only to believers I must whole heartily disagree. I would look to Romans 1:18-20 that declares all mankind is without excuses

the right thing to do – man knows that which is right he chooses that which is evil. Romans 1:32 Though they know God’s righteous decree that those who practice such things deserve to die, they not only do them but give approval to those who practice them. This is not passive religiosity or spirituality, Christianity forbids and abhors that. God requires His chosen to be passionate and active in their faith.

Earlier in James 1:22 we see this also But be doers of the word, and not hearers only, deceiving yourselves.

and fails to do it, – “Do It,” I hope by now it is clear that the “It” is any actionable “good” that can be done, that we are called to do for the glory of God.  James also makes it clear that Failing to Do It has serious consequences…

for him it is sin. – Sin, for the unbeliever it is the rejection of the Gospel. For the believer it is the toe hold, Satan needs to keep you from carrying out the Great Commission to share the Good News of Christ. Failing to be doers of the word, being Sunday Pew Christians shows God how much you value His son’s sacrifice for your sins. That is why James says knowing and not acting is sin. Of course we all know the consequence or wages for sin (Romans 6:23) is eternal death.

It is far to simple to be that nod your head in the pew on Sunday believer and go back to being in the world Monday through Saturday person. The problem is Christ never called us to a life of ease, He called us to a life of servitude. It is not good enough to know what is and hate what is evil and bad in the world. We are obligated and have a responsibility to do what we know is good.

What are you doing for the Kingdom today?