What Is A Woman? 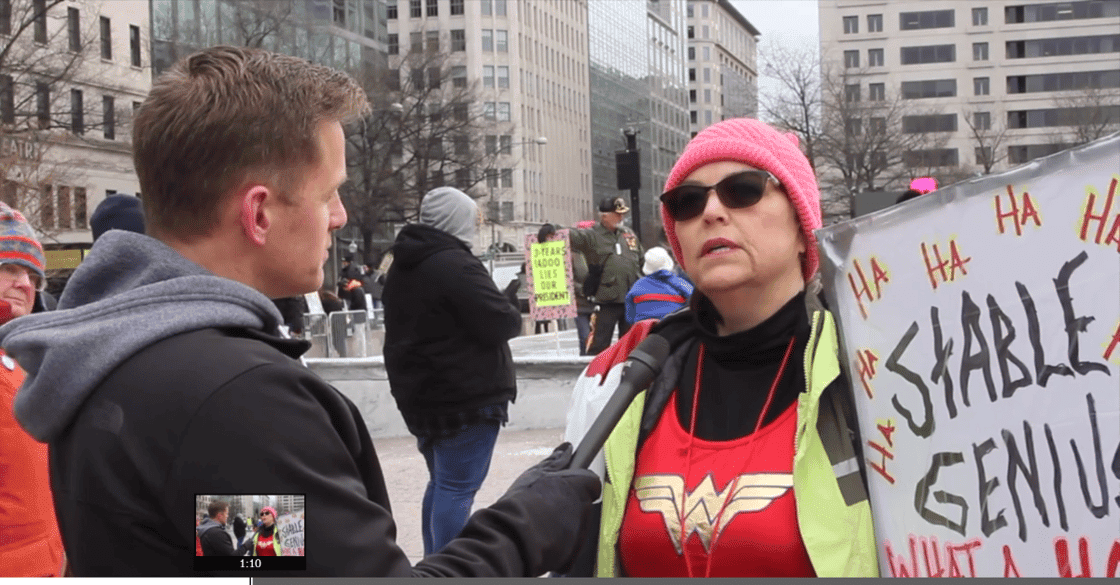 One of the things I learned from years of teaching students how to defend their faith is sometimes the best way to test an idea is through questions: “What do you mean by that?” “Why do you believe that?” and “Can you define that?”

My colleague Joseph Backholm is a master of asking these revealing questions. You may know him from a viral video from a few years back when he asked university students whether they would accept him if he identified as a six-foot-five Chinese woman. They reluctantly all said “yes,” even though Joseph is a not-even six-foot white guy.

Over the last year, Joseph has led the Colson Center’s “What Would You Say?” video series. As part of this project, Joseph traveled to Washington, D.C. a few weeks ago to interview participants at two very different demonstrations: First, the Women’s March, and then, the March for Life. His question this time was probing, and the answers were revealing.

“What is a woman?” It seems like answering that question would be a prerequisite for participating in, I don’t know, a women’s march. Yet incredibly, none of the women he talked to—despite their passionate advocacy of women’s rights—could give him a clear answer.

“A woman is anything that she wants to be defined as,” said one. “A woman is someone who chooses to express themselves,” said another. “That’s a trick question,” said still another. Two other women who were selling uterus pins told Joseph that they don’t think having a uterus is what makes a person a woman!

Joseph and I talk about these interviews on the latest episode of the BreakPoint Podcast. He explains how the video wasn’t produced by cherry-picking or selective editing. None of the women he talked with could clearly or objectively define a woman.

“They have been catechized so effectively,” Joseph said, “that they don’t spend any time thinking about whether what they say is true or consistent.”

He also asked marchers two more questions, which we’ll feature in another upcoming video at WhatWouldYouSay.org. First, he asked whether these women supported a new California law that requires that corporate boards have female members. All enthusiastically said yes. Yet when asked whether children need both a mother and a father in the home, these same women said no. Love, they said, not gender, is all that matters in parenting. The contradiction was apparently lost on them.

Thankfully, there was another march in D.C.—a much bigger, more energetic one. The 47th annual March for Life was filled with women calling for an end to legal abortion. And when asked the same question, “What is a woman?” these ladies were able to answer quickly and consistently. They were clear: A man cannot become a woman, regardless of how he identifies. In other words, those who clearly understand when human life begins also clearly understand what a woman is.

Still, I couldn’t help but notice how some of the younger women that Joseph asked to define a woman hesitated before giving what they knew to be a politically incorrect answer. It was as if they expected the LGBT Zeus to smite them for telling the truth. And yet they bravely told it, while also bravely standing up for the unborn. I tell you, I hope their march is the one that represents the future of America.

All of this should remind us of how much what’s “normal” has changed for the younger generation, and how far-reaching the contradictory catechism we saw at the Women’s March really is. Folks, when we say ideas and worldview matter, this is what we mean, and it’s why videos like “What Would You Say?” are so important.

Those of us who didn’t grow up with modern gender politics need to realize that we are immigrants in this brave new world, but our kids are natives. They’ve never known any different. What’s obvious to us isn’t always obvious to them. And answers that come naturally for us often take courage for them. That’s why we must keep exposing lies about the human person and prepare them to speak politically incorrect truths. And maybe the best way to do that is to teach them how to ask good questions.

Pro-Life Women Know What a Woman Is: An Interview with Joseph Backholm John Stonestreet | BreakPoint | February 10, 2020

Watch the Video: “Two Marches: One Question: What Is a Woman?