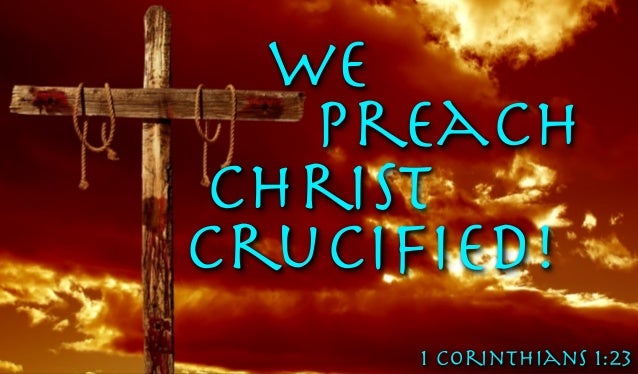 Paul writes from Ephesus to the church at Corinth, one he had spent the better part of 18 months establishing.

In v.1-9, Paul does his usual greeting and then gives thanks to the church there in Corinth.  In v.10-13, Paul points out the strife (divisions among the church) in Corinth.  They have broken into factions, some relying upon Paul’s teachings, others Peter or Apollos. (Sounds like the Denominations we have in modern society today) In v.14-17, Paul thanks God he did not contribute more to this mess by adding more believers to the church. This is a sad commentary when you think about it. Paul’s and every true believer’s goal in life should be the Great Commission, but Paul says, no not when it breads chaos. In v.18-25, we see the power of the cross and worldly wisdom vs. Godly wisdom. Finally, in v.26-31, Paul makes two points, first Godly Wisdom is on display through foolish and weak things of this world,  and second only true believers can get real (Godly) wisdom.

Our text today But we preach Christ crucified, unto the Jews a stumblingblock, and unto the Greeks foolishness; (KJV) comes from v.18-25, where Paul is speaking about the power of the Cross and why it is so foolish to many.  v.18 says,  For the message of the cross is foolishness [absurd and illogical] to those who are perishing and spiritually dead [because they reject it], but to us who are being saved [by God’s grace], it is [the manifestation of] the power of God. (AMP) Note the word foolishness that the AMP adds the words [absurd and illogical] comes from the same Greek word used to form terms such as moron. It’s not merely that the world sees the gospel as odd, or unusual. They see it as stupid—as idiotic.

Paul says in the previous verse that the main “religious” groups of the era Jews and Greek had different demands upon folks. The Jews wanted signs of miracles, that God was working in areas while the greeks ever the humanists demanded logic and fancy speech.

Thus our text, Paul says, we preach Christ crucified, in other words, we preach the TRUTH no matter if it is a stumbling block to the Jew or Greek. This would seem to contradict, others scripture, where Paul says never be a stumbling block to others.  I have said it a thousand times, CONTEXT means everything. In those instances, Paul is saying do not do anything personally to make someone stumble. NOWHERE does he ever imply the Gospel is such a device. In fact the exact opposite.  The Gospel is the means by which the lost are saved.

Are you preaching, sharing, writing the UNCOMPROMISED Truth of Christ Crucified today?

Lord God, give me the courage, strength, and most importantly the wisdom to always share your uncompromised Word. Let me preach, teach and write about Christ and Him Crucified, never a  watered-down Gospel just to suit the itching ears of modern man. I pray my words will always Glorify you. – AMEN