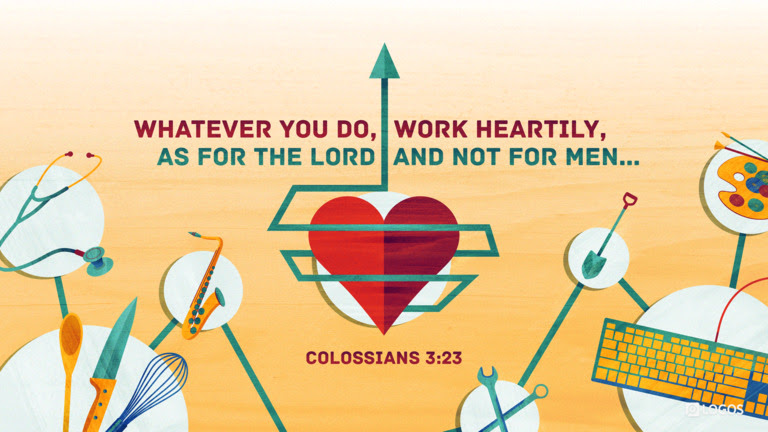 The book of Colossians is another of Paul’s writings while he was incarcerated. He writes to the church at Colosse, concerning the Gnostic and Judaeo heresies getting intermixed with the Christian faith they had been taught.

In Chapters 1-2 he related his thankfulness for the faithful that have not scummed to these false teachings. Then in Chapter 3 Paul sends a clear message to v.2 focus on God. He then divides this into two themes, sections or categories, self; that is the new creation in Christ v.1-17, and life; that is living out the Christian Character v.18-28.

And whatsoever ye do, – It must be noted that most commentaries agree on two things this is in agreement with verse 17 and it is directly referencing servants mentioned in  v.22.

Whatever you do, If you have ever seen the Movie “Patton” General George Patton makes the now famous line “shoveling shit in Louisiana” was made famous as a vulgar line used by U.S. General George S. Patton in a motivation speech to his troops on June 5th, 1944 (the day before D-Day).1 While this may seem an unusual example to site in a Devotional, Patton was making a point similar to Paul.

do it heartily, – From the depths of your soul! For those who have served in the Armed Forces first God Bless you, you understand this. You have seen those you join not out of duty but for what they think is an easy ticket to education money or some such. When it becomes crunch time they are all but useless. Their heart and soul is not in it.

as to the Lord, – In the last two devotionals Who’s Approval and Approved Workman I pray we have done a good job of pointing out that it is God and God alone whom believers work for and to please.

and not unto men; –  The Westminister Shorter Catechism asks the question, “What is the chief end of man?” The answer “Man’s chief end is to glorify God, and to enjoy him forever.”  So the self imposed question must be whom are you working for, God or Man?

I may have relayed this story before but it is worth repeating.

After Hurricane Katrina most of the sewage system along the Coast of SE Mississippi was destroyed (along with everything else). You could flush toilets, but only liquid waste no solids of any kind at all.

The Ministry I served Rebuild Lakeshore, had a system set up where daily a couple of volunteers would collect these 5 Gallon buckets and burn the contents (Yup reminded me of the Army too). It was a dirty, smelly job but one that had to be done for about 4 years before the grinders were up and running again.

I will not embarrass the individual but there was one teenage boy who really seemed to enjoy doing this and when I asked him about it he quoted Colossians 3:23 to me. I later used it as opening remarks to every group of volunteers that came through.

The moral or lesson from that encounter was simple. No matter the task even one as unpopular or disgusting as cleaning poop buckets can and must be done to God’s Glory.

So the question is simple what can you be doing to glorify God today as God’s Workman?