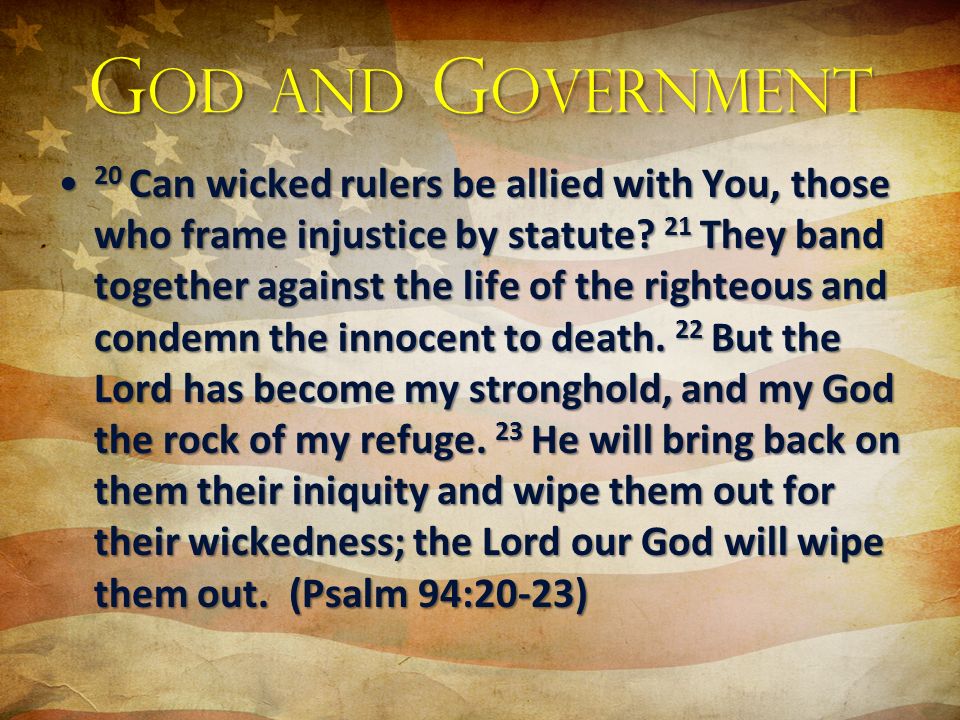 Basically this is an appeal to God for the oppression of His righteous chosen people we can break it down this way:

Note how the author of the Psalm carefully crafts the psalm to first, Acknowledge God, His power and authority. Only then does he make his petition point out the folly of those oppressing them, reassures the remnant of God’s sovereignty and only then asks God to intervene.

It is also noteworthy also that he never says or asks ‘God destroy my enemies’ he instead in faith says v.23 He will bring back on them their iniquity and wipe them out for their wickedness; the Lord our God will wipe them out. This is a good lesson for everyone, vengeance belongs to the Lord Romans 12:19, and God is more than capable of handling any situation without our help. We need not pray for vengeance but pray FIRST for salvation of our enemies and then for righteous judgement.

Can wicked rulers be allied with you, those who frame injustice by statute? – Those who rule not by the laws of God (Ethically, Morally and Legally) but by the laws of man (Corrupt, Depraved and Sinful). We see this being played out before our very eyes in America today. Once the symbol of freedom and democracy around the world, we have become a hotbed of radical corrupt immoral leadership.

They band together against the life of the righteous and condemn the innocent to death –  Mankind like company and Evil wants company to spread its chaos. Again the signs of the times in America make this self evident, ‘That all men ARE NOT created equal’. Go ahead and speak out against the new radical social agenda and see what happens. Sadly it is not just a few small groups but elected representatives in Congress, Big Businesses and entire cities jumping on the train of destruction.

But the Lord has become my stronghold, and my God the rock of my refuge. – The only defense God’s true elect have is in Christ. I would be negligent if I did not note however that being a “True Christian”  that is an outspoken follower of Christ is hard enough today and will only get worse in the coming months and years.

He will bring back on them their iniquity and wipe them out for their wickedness; the Lord our God will wipe them out. GLORY! We have a conqueror who is greater than any. As I noted above it is not for us to seek or pray for vengeance, God has a handle on it and His righteous wrath will deal with those who oppose His Glory!

God cannot have fellowship with evil Habakkuk 1:13, and neither should we 1 John 1:5-7.  We are to point out ( prayerfully rebuke) these evils at every opportunity in a manner that reassures the flock and does not instill vengeance upon the lost.

In the AMP Bible there is a footnote for verse 6, it reads:

Psalm 94:6 Widows, resident aliens, and the fatherless were particularly vulnerable members of ancient society, since they often had little or no economic means. The wicked could easily take advantage of them. God in several Old Testament passages commanded Israel to care especially for these helpless members of society. See, for example, Deut 24:17-22; Ps 146:9; Is 1:17; Zech 7:9, 10.

Sound familiar? It should these are the same (I would add single mothers too) vulnerable members of ancient society targeted by the left and the morally corrupt today. Their end game is to convince them they have been the targets of abuse by the “Elite” that is those with wealth.

While the bible is full of warnings about the corruptive native of money, it DOES NOT SAY wealth in itself is evil. There were many wealthy first century converts that helped establish the church, read the book.