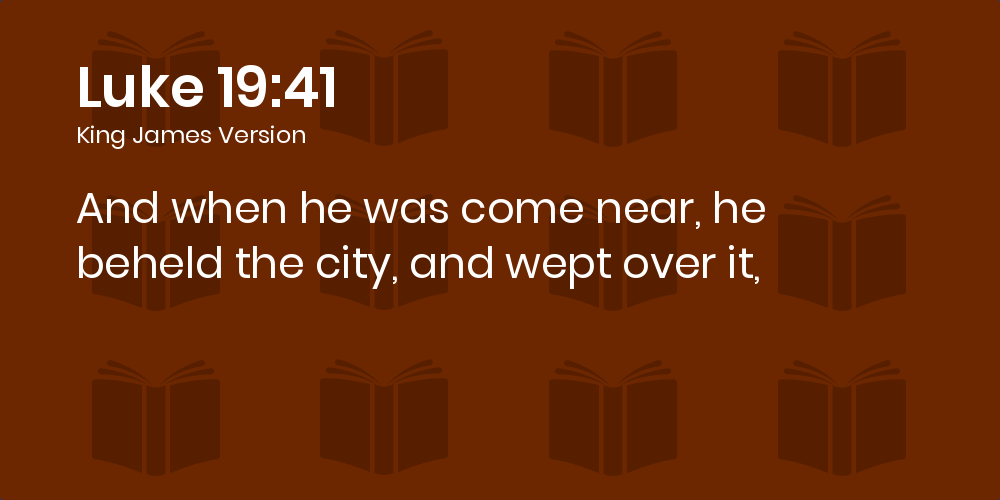 Some days you wake up and think you have a plan but God has another. I was all set to use Psalm 19:1 “The Glory of God” for today’s text and while researching it came across today’s sermon and felt I had no choice but to use it. I hope it blesses you as it did me. – Mike

The incident of Lazarus’ death (John 11:35) this  and in the Garden of Gethsemane (Mark 14:32-42) are the only other records of Jesus weeping. What is significant here is He is doing so because is Israel’s ongoing disobedience.

Let me briefly break it down:

v.41: Jesus is making his triumphant entry into Jerusalem and begins to weep

v.42: Jesus sees the complete arrogance and ignorance of the Jewish people

v.43: He foresees the coming siege of Jerusalem

v.44: He knows because of their disobedience and turning away from God, the nation of Israel will be destroyed. God will lift His hand of divine providence and protection.

As I read the sermon this morning I began to think not “what would Jesus do” but  What Would Jesus Think?  Would He Weep; if He entered say Minneapolis, Seattle or Washington D.C.?

Has God already lifted His providential hand from the U.S.? If so can we blame Him? Consider how steadfast we have as a nation turned our backs on Him, how far we have come from We the people…

Walter Maier held a doctorate in philosophy from Harvard and taught at Concordia Seminary in St. Louis, but is best known for his worldwide radio broadcast, Bringing Christ To the Nations. He was heard in over 120 nations and by over twenty million souls. He was a Lutheran at a time when his denomination was denying the old time religion. He stood true, extolling the reliability of Scripture and man’s need for the sacrifice of Christ.  His preaching was inspiring and direct.  Early in his ministry he won the Billings Prize in Oratory and used all of the rhetorical tools of the good communicator.  Billy Graham called him the greatest evangelist of the 20th century.  In the face of harsh opposition, he never dipped his colors or compromised his principles.

Editor’s Note:  This sermon was written and delivered during World War II.  The illustrations and allusions to war belong to this time period.  Maier supported the war and the troops but many liberal religious leaders opposed it strenuously.