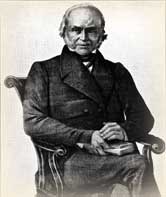 Who would be the next president of the United States? The election of 1824 gave none of the three candidates a majority vote. Under the Constitution, the House of Representatives must decide the matter.

On this day, February 9th, 1825 they did so. Rejecting Andrew Jackson and Henry Clay, they chose one of their own, John Quincy Adams.

Until George W. Bush’s election, he was the only president’s son to have become president himself. Before holding America’s highest office, Adams was a lawyer, senator, diplomat, and Secretary of State.

That such a man could be elected is a reflection of America’s religious roots. John Quincy Adams sprang directly from those roots and had a firm faith. If Christianity is proven by character, Adams was surely a Christian. This stubborn man whose motto was “Watch and Pray,” spoke openly of his trust in God: but not for that did he win his nickname “Old Eloquence.” Rather, it was for championing principle and attacking the institution of slavery.

He was an unyielding patriarch, tough as the granite of his native New England. Every day he read two to five chapters of the Bible in the original Hebrew and Greek and drew strength from them. He prayed daily. Not content merely to read, he acted on what he read. So often did he put principle before party he became highly unpopular with his followers.

John Quincy did not let their disapproval alter his course. “The Sermon on the Mount commends me to lay up for myself treasures, not on earth, but in Heaven. My hopes of a future life are all founded upon the Gospel of Christ…” he had written his father. After his single term as President, he returned to Congress.

Christ was central to John’s theology. When Unitarianism emerged, denying the divinity of Christ, Adams flirted with it, but the Bible soon convinced him the doctrine was false. Either Jesus is God incarnate and our path to salvation or we have none. With characteristic rectitude John wrote as much to his parents.

“I find in the New Testament, Jesus Christ accosted in His own presence by one of his disciples as God, without disclaiming the appellation…I see him named in the great prophecy of Isaiah concerning him to be the mighty God.”