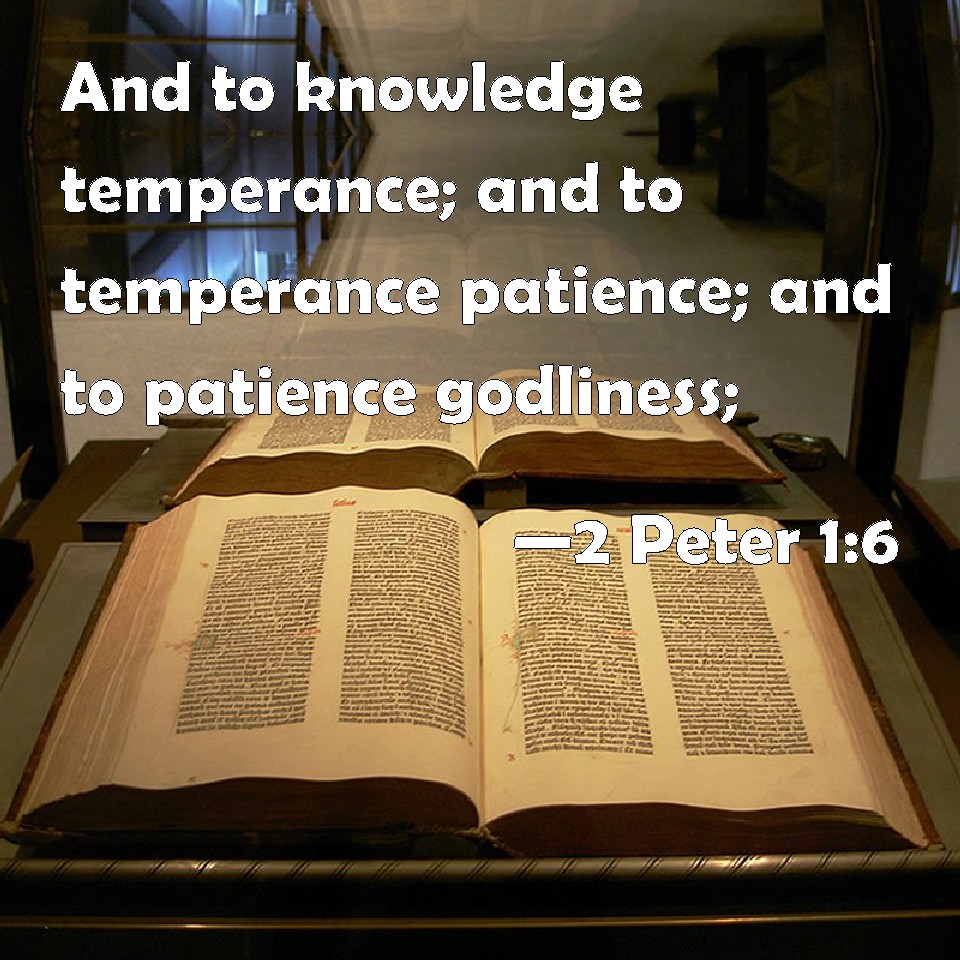 A few weeks ago I published an article I entitled God’s Tool Box  based upon one of my favorite verses 2 Peter 1:3. I made the statement In my opinion this should be a verse every new believer learns early on because it is packed with reassurance that we can live the “Christian” life no matter how hard it gets.

I followed it up last Saturday with a Series I have called “Adding to God’s Tool Box” Today I want to look at verse 6 or Part II of what goes into the tool box.

So far in the tool box of Righteousness we have Faith, the precious hope of eternal life with God in eternal bliss. We have Virtue, the ability to be good, act morally at all times showing kindness and reflecting the example Christ left for us. Finally we have Knowledge, this is the Godly knowledge, the knowledge found in God’s Holy Word that helps us to be more than conquerors.

Today we begin by adding self-control: self-kon-trol’ (egkrateia/ Greek): Rendered in the King James Version “temperance” (compare Latin temperario and continentia), but more accurately “self-control,” as in the Revised Version (British and American) (Acts 24:25; Galatians 5:23; 2 Peter 1:6); adjective of same, egkrates, “self-controlled” (Titus 1:8 the Revised Version (British and American)); compare verb forms in 1 Corinthians 7:9, “have …. continency”; 9:25, the athlete “exerciseth self-control.” Self-control is therefore repeatedly set forth in the New Testament as among the important Christian virtues. Temperance is moderation in thought, word, or action. Those who practice temperance are self-controlled and show restraint in their passions and behaviors.¹

This can be a challenge in the world we live in, surrounded by so many stupid people. Yes you read that correctly, I said STUPID, I define them as those who refuse to use knowledge gained or refuse to attempt to gain knowledge available. Those who insist on texting and driving cut you off and then curse and flip you off, those who have no common decency in a restaurant and play their cell phone music load, Those who mimic the talking heads in the media, classrooms and PULPITS across America and do not take the time to be Bereans and check out the truth for themselves.

It is very easy to just want to go off on these folks, and as my sending Pastor remarked before sending us off to the mission field “You are a hard man Mike, a hard man.” He is 100% correct and I am hardest upon myself for I realize the world is not SAVE BY GRACE, and in their sinful nature they can be expected to act Stupid. I do not think it is being a “bad Christian” to point out these errors, rather how you do it. Is it with moderation in thought, word, or action?

The next tool is endurance, we are in this for the long haul. No matter how long our life shall last (and we have no way of knowing when the master will call us home) we must endure (be persistent, never give up, persevere, have stamina,) till the end. every time I think of this two bible references come to mind, Job who endured the highest highs and lowest lows of any man ever and never turned from God. Then there is the Apostle Paul when he speaks on the reason for his enduring all in 2 Timothy 2:8-13.  Paul makes it simple he says if we endure, we will also reign with him;
if we deny him, he also will deny us; v.12  Paul endures because his eye is on the prize eternal bliss in Heaven with his Lord and Savior.

The final tool today is godliness, do not be confused as some would have you believe, (Copland, Myers and others) that you too can be a god.  what is being spoken of here is adding more than mere moral or human goodness to your arsenal of tools. This is the moral or Spiritual goodness that reflects the nature of our Triune God Himself.

One thought on “Adding To God’s Tool Box Part II”