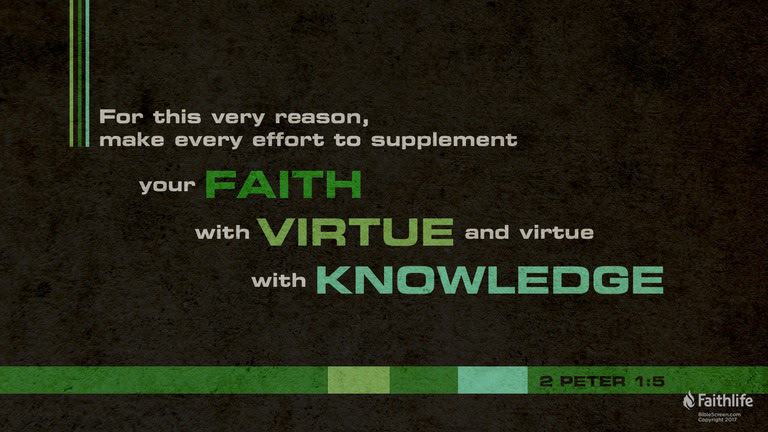 A few weeks ago I published an article I entitled God’s Tool Box  based upon one of my favorite verses 2 Peter 1:3. I made the statement In my opinion this should be a verse every new believer learns early on because it is packed with reassurance that we can live the “Christian” life no matter how hard it gets. Today I want to begin looking at verses 5, 6 and 7 or what goes into the tool box.

Before God saved us by His Grace alone we had no real Faith or if we did it was at best misguided. We lived for self not Christ. Now our faith needs to be bolstered or strengthened so we can live for Him. Here the first tool is Virtue.

What is Virtue; Websters 1828 Dictionary defines it as:

Virtue therefore is being good, acting morally at all times showing kindness and reflecting the example Christ left for us.

The second tool added today is Knowledge. I am not sure why this one word (defined here) is such a sticking point for so many today. I here it over and over again, I do not need any formal education, or I don’t need to go to cemetery because I have the Holy Spirit as my teacher. Folks even use that as an excuse for not assembling together in church.  All of these excuses are UN-BIBLICAL. Jesus spent years learning before His ministry began, the Apostles learned for 3 years under Jesus before being sent out. The Apostle Paul, one of the most educated Jews of the time spent an additional 3 years learning before he began His ministry are we better than him? I am not tooting my own horn, I have spent the last 21 years studying God’s word first and foremost in an effort to insure I am doing His Will and daily He reveals something new to me. Many times it is on a verse just like this, that I have read a hundred times or more.

Sir Francis Bacon was the first person attributed to the phrase “Knowledge is Power’. It dates back to 1597 when he published the maxim in his book, “Meditationes Sacrae and Human Philosophy. He was referring to worldly knowledge how much more so Godly knowledge, the knowledge that helps us to be more than conquerors.

And besides this, giving all diligence,…. “Or upon this”, as the Syriac and Arabic versions read, bestow all your labour, diligence, and care; namely, on what follows, and that from the consideration of what goes before; for nothing can more strongly animate, and engage to the diligent exercise of grace and discharge of duty, than a consideration of the high favours, and free grace gifts of God, and the exceeding great and precious promises of his Gospel:

add to your faith virtue; or “with your faith”, so the Arabic version renders it, and the like, in the following clauses. They had faith, even like precious faith with the apostles, not of themselves, but by the gift of God, and which is the first and principal grace; it leads the van, or rather the “chorus”, as the word rendered “add” signifies; and though it is in itself imperfect, has many things lacking in it, yet it cannot be added to, or increased by men; ministers may be a means of perfecting what is lacking in it, and of the furtherance and joy of it, but it is the Lord only that can increase it, or add unto it in that sense, and which is not the meaning here: but the sense is, that as it is the basis and foundation of all good works, it should not stand alone, there ought to be virtue, or good works along with it, by which it may be perfected, not essentially, but evidentially, or might appear to be true and genuine; for by virtue may be either meant some particular virtue, as justice towards men, to which both the grace and doctrine of faith direct; and indeed pretensions to faith in Christ, where there is not common justice done to men, are of little account; or, as others think, beneficence to men; and so the Ethiopic version renders it, “proceed to bounty by your faith”; and faith does work by love and kindness to fellow creatures and Christians; but this seems rather designed by brotherly kindness and charity, in 2 Peter 1:7 or boldness, courage, constancy, and fortitude, which ought to go along with faith. Where there is true faith in Christ, there should be a holy boldness to profess it, and constancy in it, and courage to fight the good fight of faith, and firmness of mind to stand fast in it, notwithstanding all difficulties and discouragements; or virtue in general here meant, not mere moral, but Christian virtues, which are the fruits of the Spirit of God, and of his grace; and differ from the other, in that they spring from the grace of God, are done in faith, by the assistance of the Spirit of Christ, and by strength received from him, and in love to him, and with a view to the glory of God; whereas moral virtues, as exercised by a mere moral man, spring from nature, and are performed by the mere strength of it, and are destitute of faith, and so but “splendida peccata”, splendid sins, and proceed from self-love, from sinister ends, and with selfish views:

and to virtue, knowledge; not of Christ, mentioned 2 Peter 1:8 and which is included in faith, for there can be no true faith in Christ, were there not knowledge of him; but of the will of God, which it is necessary men should be acquainted with, in order to perform it; or else though they may seem zealous of good works, their zeal will not be according to knowledge; they ought to know what are virtues or good works in God’s account, and what are the nature and use of them, lest they should mistake and misapply them; or of the Scriptures of truth, and of the mysteries of the Gospel, which should be diligently searched, for the increase and improvement of knowledge in divine things, and which has a considerable influence on a just, sober, and godly living; or by knowledge may be meant prudence and wisdom, in ordering the external conversation aright towards those that are without, and in showing good works out of it, to others, by way of example, and for the evidence of the truth of things, with meekness of wisdom.

The Sabbath »
« Today in Church History