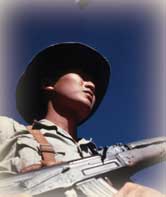 How far are you willing to go to serve the Lord? Declare his glory among the nations, his marvelous works among all the peoples! Psalm 96:3 (ESV)

“This is a time to trust the Lord,” Hank Blood told fellow missionaries. In 1967, the Viet Cong had stepped up attacks against South Vietnamese towns. Several times they entered Lac Thien, the village where the Bloods worked. For the sake of his family, Hank moved them forty miles to Ban Me Thuot where there was a strong South Vietnamese army presence.

Hank and his wife Vange (Evangeline) had come to Vietnam in 1959. The two had met while training with Wycliffe Bible Translators. In one of their early experiences, the Viet Cong seized a store where the Bloods were renting a room. Unaware that the family were crouching behind a thin partition behind them, the Viet Cong turned the store into a command center as they assaulted the town.

Several close calls in Vietnam made Hank a little jumpy even when out of that country. Once, while taking advanced training in Mexico, he hit the dirt when a boy popped a fire cracker!

Toward the end of January, 1968, the Viet Cong made their all-out assault, known as the Tet Offensive. Fighting errupted at Ban Me Thout. This time the missionaries were among the targets. Before the fighting ended, six workers of the Christian and Missionary Alliance were dead.

Hank was shot at by a Viet Cong soldier in the shower room. He hurried back to Vange and the couple crouched with their children under their kitchen table. The Viet Cong called for the preacher, then blew open the front door. Vange and a daughter took shrapnel wounds in a second blast.

Soldiers tied Hank’s arms behind him. They led the Bloods to where they were holding other captives. The next day, Vange and the children were freed. Vange was able to kiss Hank quickly one last time before he, another missionary named Betty Olsen, and Mike Benge, a United States aid worker, were marched as captives into the jungle along with pastor Ngue.

Ngue escaped. But for five years, the outside world had only sporadic news about the other three captives. Vietnamese Christians managed to get blankets to them once.

In 1973, Mike Benge was freed. He told of hard treatment. Hank had died on this day, July 13, 1968, about five months after his capture, suffering pneumonia and malnutrition. For a long time he had endured sharp kidney pains and persistent itching. His last thoughts had been for Vange, the children and the Mnong-language Bible he hoped Vange would be able to finish. Betty helped bury Hank, then died herself three months later of dysentery, just two days after her thirty-fifth birthday. “She never showed any bitterness or resentment,” said Mike. “To the end she loved the ones who mistreated her.”

Was the sacrifice worthwhile? During his nine years of mission work, Hank made only one convert, a man named Tang. But that man led many Vietnamese to Christ.

Adding To God’s Tool Box Part 1 »
« Is It God’s Goodness that Leads to Repentance?