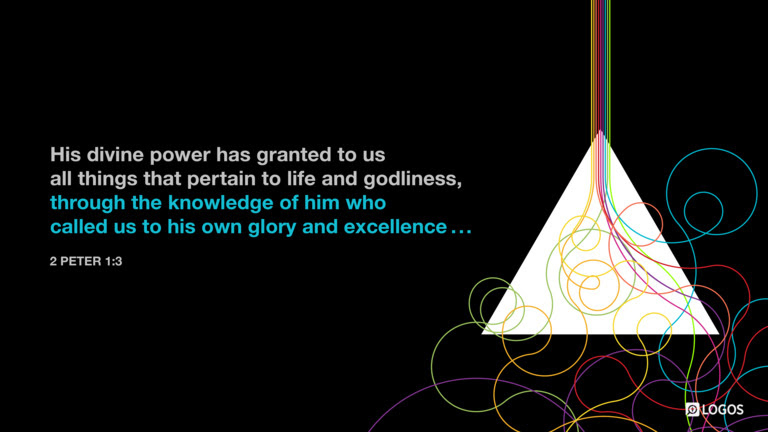 In my opinion this should be a verse every new believer learns early on because it is packed with reassurance that we can live the “Christian” life no matter how hard it gets.

The Apostle Peter in under Divine inspiration begins this letter by reminding the church, 2 Peter 1:1, “Simeon[a] Peter, a servant[b] and apostle of Jesus Christ, To those who have obtained a faith of equal standing with ours by the righteousness of our God and Savior Jesus Christ:”, that they were and are today completely equipped to be the Christian God has planned for them.

God, has given us the power to live life here on earth to the fullest. Now I am not advocating this Name it and Claim it stuff, what I am saying is what the Word of God says: “granted to us all things that pertain to life and godliness…”God wrote it I am just repeating it all things we need to live a godly (and therefore joyful) life are available to us. Am I implying a  sinless life, of course not, but one that is acceptable to Him Romans 12:1-2.

I am a builder, and the one thing everyone has to have on the job site is a good set of tools. A carpenter without a tape measure and hammer is pretty much useless. That is what Peter is saying God has given (granted) us all the tools we need that will help us live a godly life. Is it an easy build (task) living this way? Of course not as Paul says, Romans 7:14-25,  “…I do not do what I want, but I do the very thing I hate…” It is up to us, we have to choose daily to use the tools God has given us. Having all the tools is one thing, is just as important to use the correct tool for the job. Using a sledge hammer to drive a 6D (tiny) finish nail would be about as dumb as it gets. Equally dumb, is using God’s word wrong, taking it out of context or without the Whole Counsel of God applied.

So where did we get these tools? They are only available “through the knowledge of him who called us ,”  It is only for those called by God for His plan and Glory that have the tools. It must also be noted that these are not ordinary tools. These are tools blessed by the “glory and excellence” of Him who called us.

Jesus set the standard for Christians to live, God has given us the tools to live that life and the Holy Spirit to guide us through it twists and turns. Are we living up to our full potential, to the high calling in Christ Jesus today?

According as his divine power,…. Meaning either the power of God the Father, to whom belong eternal power and Godhead; and he is sometimes called by the name of power itself; see Matthew 26:64 being all powerful and mighty; or rather the power of Christ, since he is the next and immediate antecedent to this relative; and who, as he has the fulness of the Godhead in him, is almighty, and can do all things; and is “El-shaddai”, God all-sufficient, and can communicate all things whatsoever he pleases, and does, as follows: for he

hath given unto us all things that pertain unto life and godliness; referring not so much to a temporal life, though he gives that and preserves it, and furnishes with all the mercies and comforts of it; and which come to us, from him, in a covenant way, as his left hand blessings, and in great love; but rather a spiritual life, which he is the author and maintainer of, all the joys, pleasures, blessings, and supports of it, being given by him; as also eternal life, for that, and everything appertaining to it, are from him; he gives a meetness for it, which is his own grace, and a right unto it, which is his own righteousness; and he has power to give that itself to as many as the Father has given him, and he does give it to them; and likewise all things belonging to “godliness”, or internal religion; and which is the means of eternal life, and leads on to it, and is connected with it, and has the promise both of this life, and of that which is to come; and everything relating to it, or is in it, or it consists of, is from Christ: the internal graces of the Spirit, as faith, hope, and love, which, when in exercise, are the principal parts of powerful godliness, are the gifts of Christ, are received out of his fulness, and of which he is the author and finisher; and he is the donor of all the fresh supplies of grace to maintain the inward power of religion, and to assist in the external exercise of it; all which things are given

through the knowledge of him that hath called us to glory and virtue. The call here spoken of is not a bare outward call, by the ministry of the word, but an internal, special, and powerful one, which springs from the grace, and is according to the purpose of God, and is inseparably connected with justification and glorification; and is either of God the Father, who, as the God of all grace, calls to eternal glory by Christ; or rather of Christ himself, who calls by his Spirit and grace; and hence the saints are sometimes styled, the called of Jesus Christ, Romans 1:6 what they are called unto by him is, “glory and virtue”; by the former may be meant, the glorious state of the saints in the other world, and so answers to “life”, eternal life, in the preceding clause; and by the latter, grace, and the spiritual blessings of grace here, and which answers to “godliness” in the said clause; for the saints are called both to grace and glory, and to the one, in order to the other. Some render it, “by glory and virtue”; and some copies, as the Alexandrian and others, and so the Vulgate Latin version, read, “by his own glory and virtue”; that is, by his glorious power, which makes the call as effectual, and is as illustrious a specimen of the glory of his power, as was the call of Lazarus out of the grave; unless the Gospel should rather be intended by glory and virtue, which is glorious in itself, and the power of God unto salvation, and is the means by which persons are called to the communion of Christ, and the obtaining of his glory: so then this phrase, “him that hath called us to glory and virtue”, is a periphrasis of Christ, through a “knowledge” of whom, and which is not notional and speculative, but spiritual, experimental, fiducial, and practical, or along with such knowledge all the above things are given; for as God, in giving Christ, gives all things along with him, so the Spirit of Christ, which is a spirit of wisdom and revelation in the knowledge of him, when he makes him known in the glory of his person, grace, and righteousness, also makes known the several things which are freely given of God and Christ: and this is what, among other things, makes the knowledge of Christ preferable to all other knowledge, or anything else.

Straying Eyes… »
« The Love of God