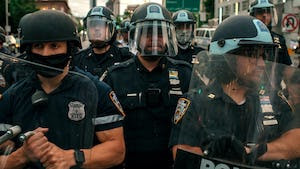 Perhaps Not What You Were Expecting

An op-ed published in The Wall Street Journal by Heather Mac Donald, Thomas W. Smith Fellow at the Manhattan Institute, pushed back on the notion that there is widespread systemic racism in American law enforcement.

Violent riots have broken out in major cities across the country over the death of George Floyd last week, resulting in police officers being attacked, businesses destroyed, and widespread arson and looting.

Mac Donald notes that while Floyd’s ultimately fatal arrest was horrifying — video shows that a police officer knelt on the 46-year-old’s neck for over eight minutes while Floyd said he could not breathe — it is not “representative of the 375 million annual contacts that police officers have with civilians.”

A solid body of evidence finds no structural bias in the criminal-justice system with regard to arrests, prosecution or sentencing, Mac Donald writes; rather, crime and suspect behavior, not race, determine most police actions. Mac Donald writes:…