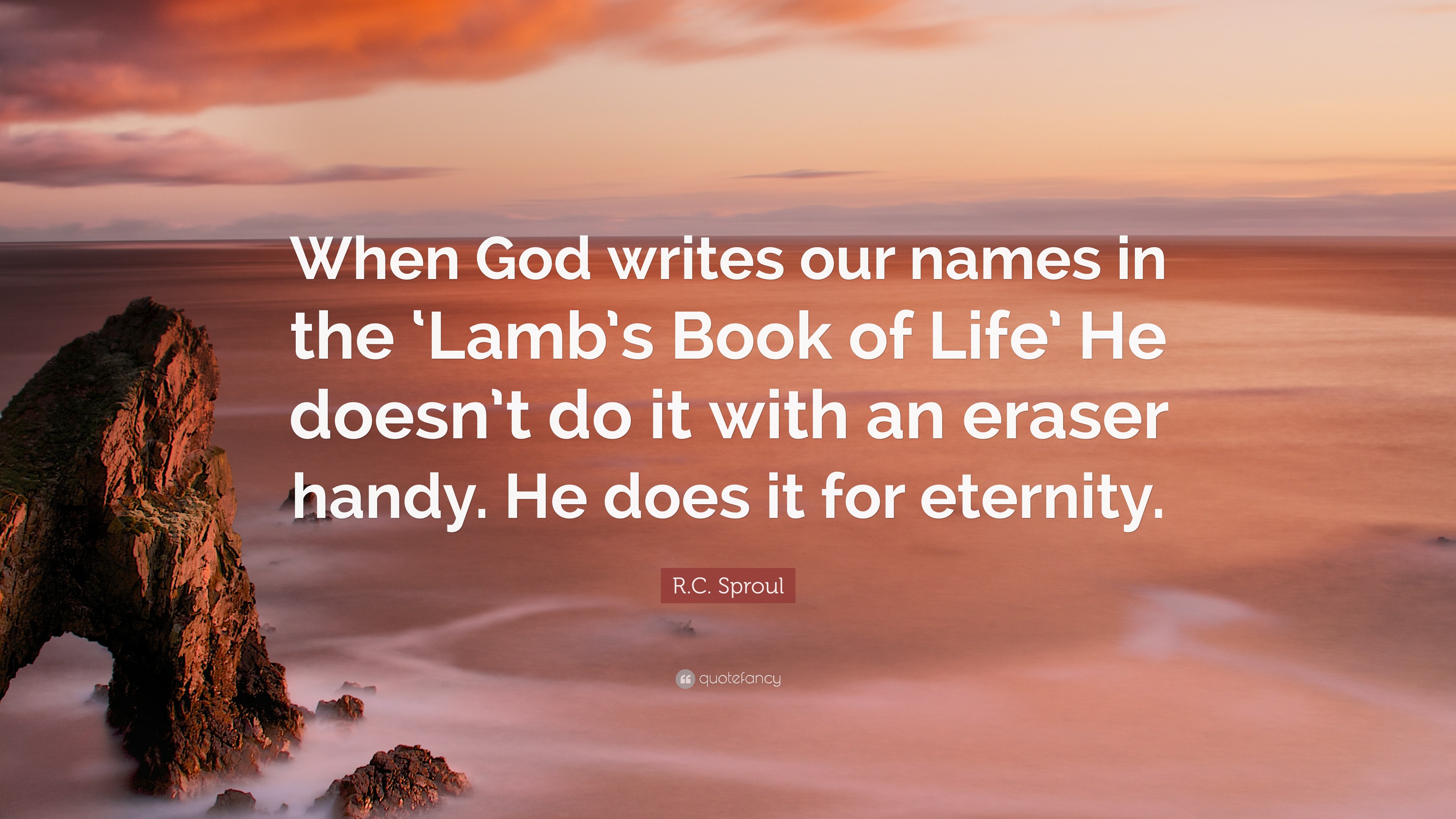 What the late Dr. R.C. Sproul was referring to is sometimes argued over in Evangelical circles. That is can a redeemed person lose their eternal salvation. I am going to leave that discussion for another day (suffice it to say no) and move on to the topic at hand “The Book of Life” or “Lambs Book of Life.”

There are a number of verses found in the bible regarding this topic here is the list found in the AMPLIFIED BIBLE , the one that I have decided to concentrate on is

Then those who feared the Lord spoke with each other, and the Lord listened to what they said. In his presence, a scroll of remembrance was written to record the names of those who feared him and always thought about the honor of his name. 17 “They will be my people,” says the Lord of Heaven’s Armies. “On the day when I act in judgment, they will be my own special treasure. I will spare them as a father spares an obedient child. 18 Then you will again see the difference between the righteous and the wicked, between those who serve God and those who do not.” (NLT)

Malachi means “My Messenger” in Hebrew in chapter three v.1-6 he delivers the message the nation of Israel has been asking for. That is God will send the promised Messiah and He will be foretold by a messenger.

In v.7-12 Malachi delivers his final message to the nation of Israel from God, admonishing them for their disobedience and transgressions.

Verses 13-18 contain two parts one is the very clear distinction between the Righteous and the Wicked. The Second contained in v.16-18 declares God’s promise of Mercy for His chosen people.

those who feared the Lord spoke with each other – keep in mind that God had just reprimanded them and now they have repented, saw the error of their ways. What do they do the conversed among themselves to encourage and comfort one another and build up one another, (1 Thess 5:11)

and the Lord listened to what they said – Wow, what an amazing phrase, what a promise, God listens to those who fear (revere) Him.

a scroll of remembrance was written to record the names of those who feared him and always thought about the honor of his name – There is a two part theological implication here, one to be written in the Book of Life (remembrance) one must first fear or highly revere God and secondly we must do it for life. This is not a once and done deal from our side of the street.  You can not decide today I will Love and fear God but tomorrow I won’t and have any expectation f eternal life.

They will be my people,” says the Lord of Heaven’s Armies – I love this, God is the Commander in Chief of the greatest Army EVER and for those who repent, fear and honor His name for life He will call you His people. Hallelujah!

“On the day when I act in judgment, – Watch out judgement, what judgement I thought when I said that little old prayer I was good to go. Think again, 2 Corinthians 5:10 (AMP) says: For we [believers will be called to account and] must all appear before the [a]judgment seat of Christ, so that each one may be repaid for what has been done in the body, whether good or [b]bad [that is, each will be held responsible for his actions, purposes, goals, motives—the use or misuse of his time, opportunities and abilities].

they will be my own special treasure. I will spare them as a father spares an obedient child. – The Good News is God promises no eternal damnation to those whom He has called His own. That does not excuse God’s children from redeeming their time on earth wisely.

Then you will again see the difference between the righteous and the wicked, between those who serve God and those who do not.” – I am not sure there is a better concise commentary on this verse than that of Jamieson-Fausset-Brown Bible Commentary Then shall ye … discern—Then shall ye see the falseness of your calumny against God’s government (Mal 3:15), that the “proud” and wicked prosper. Do not judge before the time till My work is complete. It is in part to test your disposition to trust in God in spite of perplexing appearances, and in order to make your service less mercenary, that the present blended state is allowed; but at last all (“ye,” both godly and ungodly) shall see the eternal difference there really is “between him that serveth God and him that serveth Him not” (Ps 58:11).

As 2 Cor 5:10 points out we will be judged by our works and one of the best works I can think of is to offer prayers of praise by every true believer for being in the Book of Life. Another is to offer prayers of supplication for all our unsaved family, friends, co-workers to join them. God has promised Eternal Life to those that Fear and Honor His name forever; He also promises eternal damnation for those who reject His offer of Grace and Mercy. I pray you are counted among them in the Book.