It would be good to remember these verses as we read this today: Psalm 22:28, Psalm 33:12, Psalm 2:1-6, Psalm 9:17. It has been sin that has destroyed all great nations in history. How near is America’s demise from the enemy is within? Pray for America. 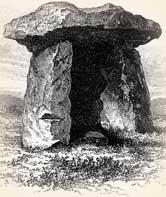 Ancient church history is like a slice of Swiss cheese with more than the usual number of bubbles. Historian Hugh Ross Williamson wrote, “For every relevant fact that can be discovered, there are ten thousand that cannot.” What we don’t know is far greater than what we do. Even what we “know” has too little cheese and too many holes.

The only eyewitness to write the story of the fall of the Britons–the British Celts–was Gildas. He told how the Romans abandoned England, how one Briton imported the first Saxons to fight his battles, and how they seized Britain for themselves. The Britons recovered for a short time, led by Ambrosius Aurelianus, temporarily stopping the Saxon drive. But in the end, they were driven into Wales and Cornwall in western England. The pagan Anglo-Saxons became rulers of the land, which took their name, Angland (England).

Gildas was not a trained historian. His book, The Destruction of Britain, leaves out just about everything we’d really like to know. Although that was the era of the legendary king Arthur, Gildas never mentions him. In fact, he ignored all too many names and dates. Mostly he was concerned to show how the sins of the clergy and nobles weakened the Celts and made them a pushover for the Saxons.

The conquest of his country left Gildas gloomy. He was like Jeremiah, who wept over the fall of Judah.

Who was this British Jeremiah? We have as little hard fact for Gildas’s own life as we do for the history of his time. He was born the same year that the Britons defeated the Saxon invaders at Badon Hill under King Arthur. But since no one can say for sure what year that was, scholars’ best guess is 516. We aren’t sure where Gildas grew up, either. Some say it was in Strathclyde, Scotland. Gildas joined the church–most likely as a monk. Even that is not certain.

Usually if we have no other date for a well-known man of the dark ages, we at least know when he died. With Gildas, we aren’t even sure of that. It is thought he died on this day, January 29, 570, because the 29th is his feast day and Welsh chronicles suggest the year was 570. Apart from that we have no interesting details such as what disease he died of or whether it was in sunny day or gloomy night. Gildas isn’t the only man with gaps in his story. We don’t know much more about the famous St. Patrick of Ireland. Multiply Gildas many times over and you can see how hard the job of the early church historian is.

Gildas may have been a friend of St. Brigid, who founded Kildare and became the patroness of Ireland and of scholars. After spending time in Ireland, Gildas moved to France. It is almost certain that he founded the monastery of St. Gildas at Ruys, in Breton, because a monk there claimed it was so in a biography he wrote of Gildas. The people of Brittany considered Gildas a saint and gave his name to a second monastery built later.

Friends urged Gildas to write the story of the ruin of his people. At first he refused because he had no documents to work from. Ten years later he relented and began work on his manuscript. Even then, he had to rely on vague reports written by foreigners.

Although we wish there was more cheese and less holes in Gildas’s book, we can be glad for what he wrote. The information he gives is better than none at all. A much more famous monk, born one hundred years after Gildas died, used his writings to prepare the first great history of England. That was the Venerable Bede. To this day, histories of England glean what they can from Gildas to fill out our spotty knowledge of his era. Monks like Gildas preserved much of what we know about early church history.