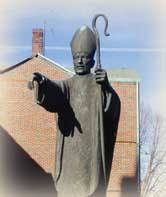 Freedom to practice religion was a rare commodity in Hungary during the Nazi occupation and under the Communist tyranny that followed it. Any religious leader who resisted either of these totalitarian regimes was in danger of life and liberty. One who was pinched in the jaws of both states was Jozsef Mindszenty. A bishop in the Roman Church during the Nazi occupation, he was imprisoned during 1944 and 1945 for protesting the arrest of Jews.

After World War II, Mindszenty was made a Cardinal of the church. As the highest official of the Church of Rome in Hungary, he became a target of Communist harassment, especially when he resisted nationalization of Polish church schools. He called churchgoers to boycott government newspapers and radio stations, because the media carried propaganda and lies.

Late in 1948, the cardinal realized he was about to he arrested. He scribbled a note to his mother: “I have taken no part in any conspiracy of any kind. I shall not resign from my Episcopal see. I shall not make a confession. But if despite what I now say you should read that I have confessed or resigned, and even see it authenticated by my signature, bear in mind that it will have been only the result of human frailty. In advance, I declare all such actions null and void.”

On this day, December 26, 1948, Mindszenty was arrested in Budapest by the Soviet stooges who governed the nation. Accused of treason, the cardinal was convicted in a show trial and given a stiff sentence the following February.

For twenty-three years he would suffer imprisonment and isolation. During that time he was unwavering in his love for God.

The Hungarian Revolt of 1956 brought a change in his circumstances. Local peasants, armed with hoes, pitchforks and other farm tools demanded freedom for Mindszenty and food for the people. The soldiers guarding the cardinal gave him up.

Shortly afterward, Mindszenty appeared at the United States Embassy in Budapest, requesting asylum. The soldiers on duty were not sure what to do but decided to admit him. Washington telexed a few moments later to say every courtesy should be extended to the cardinal. Cardinal Mindszenty remained in the embassy fifteen years. In 1971, Pope Paul VI ordered him to Rome.

Free at last, Mindszenty toured among Hungarian refugees, but the Vatican placed a gag on his words. Rome had cut a deal with the Hungarian Communists. But Mindszenty wasn’t the sort of man to remain silent. Asked to resign, he refused to do so, upon which the pope relieved him of his responsibilities. The cardinal died in exile in Vienna in 1975. His eulogy accused both the Communists and the Vatican of forcing him into needless suffering. For their part, his opponents accused him of fascism and antisemetism.