If My People Humble Themselves 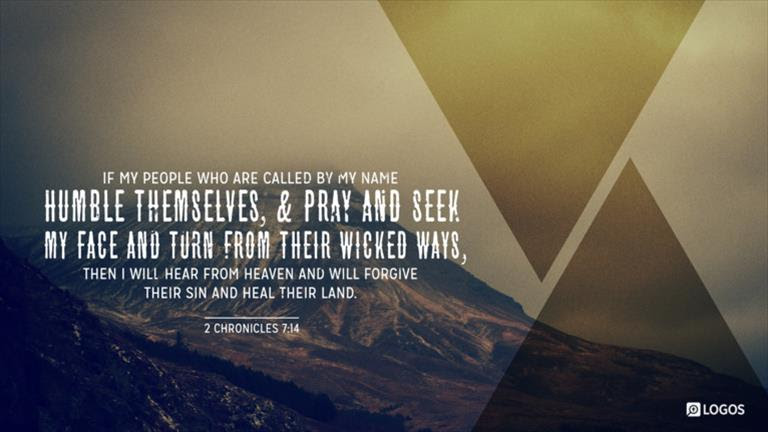 Yesterday we looked at Psalm 25:8-9 Good and upright is the Lord; therefore he instructs sinners in the way. 9 He leads the humble in what is right, and teaches the humble his way. It was written for our personal edification, to remind us as individuals that we need to humble ourselves daily before the Lord.

Today’s text is similar in that humility is a key component but the call is not so much for individuals but for the entire nation of God’s people. Some would argue that only Israel falls under this category, and while Biblically, that nation is identified in the bible as chosen by God to be His, I do not think we can count out any nation who claims Biblical Precepts and Principles (and therefore God) as its foundation.

As always context is key to understanding this verse.  King Solomon has just finished dedicating the temple 2 Chronicles 7:4-10 and note in v.10 …he sent the people away to their homes, joyful and glad of heart for the prosperity[b] that the Lord had granted…They finish the dedication and all is well prosperity reigns and the people are happy.

Shortly thereafter (or so it would seem) in v.12-13 we find the Lord visiting Solomon;   Then the Lord appeared to Solomon in the night and said to him: “I have heard your prayer and have chosen this place for myself as a house of sacrifice. 13 When I shut up the heavens so that there is no rain, or command the locust to devour the land, or send pestilence among my people, Wait a minute, what is happening, God says he hears the prayers of Solomon, the Temple is acceptable to Him; BUT v.13  implies the people are not.

Our text v.14 makes it clear God is not pleased with the nation of Israel. Why because:

Okay, this is where my opinion comes in, first we (USA) are not God’s chosen people nor are we now nor ever been a “Christian” nation. We are however a nation clearly founded upon Christian-Judaeo (Biblical) precepts and principles. Approximately 71% of all Americans¹ identifying as Christian. Yet we as a country live a depraved and ever increasing sinful lifestyle. American enjoyed a very happy and prosperous beginning as they followed the precepts and principles the nation was founded upon. As we ever increasingly failed to humble themselves before the almighty God, have failed to pray and seek God’s guidance and have failed to turn from our evil ways I am convinced God’s hand of divine providence has been lifted.

It is time all who call themselves “Christian”, those; humble themselves, and pray and seek my face and turn from their wicked ways.

The alternatives are grim. God made to clear to the nation of Israel 2 Chronicles 7: 19-22; “But if you[c] turn aside and forsake my statutes and my commandments that I have set before you, and go and serve other gods and worship them, 20 then I will pluck you[d] up from my land that I have given you, and this house that I have consecrated for my name, I will cast out of my sight, and I will make it a proverb and a byword among all peoples. 21 And at this house, which was exalted, everyone passing by will be astonished and say, ‘Why has the Lord done thus to this land and to this house?’ 22 Then they will say, ‘Because they abandoned the Lord, the God of their fathers who brought them out of the land of Egypt, and laid hold on other gods and worshiped them and served them. Therefore he has brought all this disaster on them.’”  The handwriting is on the wall for the USA; will we as a nation humble ourselves or be destroyed?