Contrary to popular belief that is being flaunted across America today, we are NOT entitled to anything and everything to fulfill our desires. We MUST work for that to happen. Here is an example of one man who To support his wife and himself, the determined man worked, took action instead of whining. (2 Thess 3:10) – Mike 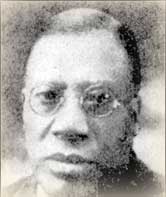 On this day, July 7, probably in 1851, Charles Albert Tindley was born in Maryland–a slave state–to a slave father and free mother. That gave him an uphill road from the start. He was sent to work with other slaves, although free born. But he taught himself to read and took Bible classes at night. After the American Civil War and emancipation the world changed for America’s black people. Charles married and moved north to Philadelphia.

To support his wife and himself, the determined man worked as a hod carrier at the Bainbridge Street Methodist Episcopal Church. (A hod carrier totes supplies for builders.) Continuing his education, he studied at a local Bible institution, preparing for the ministry, and took correspondence courses from Boston Theological Seminary.

When Charles took his examination to become a Methodist minister, he was working as a Sexton–essentially a church janitor–at the Bainbridge church. Charles would go on to earn his doctorate and taught himself Greek and Hebrew through correspondence courses.

What motivated him was faith. It was the kind of faith that can face a bare table with confidence. Once there was nothing to eat in the house. He told his wife to set the table. “Why?” she asked, knowing full well the cupboards were bare. He insisted. Shortly there was a knock on the door. A man brought them dinner, saying his family had cooked too much.

God proved that Charles’ faith was not misplaced, giving him success as a minister. His booming voice and talent for songs made him an outstanding music leader. He is often credited as the “Father of Gospel Music.” In the course of time, twenty five years later, Charles became pastor of the same Bainbridge church at which he had worked as a common laborer. It had 130 members when he took over. The mixed race congregation grew to about 10,000 under Charles. The congregation had to build a bigger meeting place.

Charles Tindley wrote some of the most original and beloved songs in our hymnbooks: songs such as “Nothing Between My Soul and the Savior,” and “We’ll Understand it By and By.” More than half of the songs which appeared in the popular 1909 Soul Echoes: a collection of songs for religious meetings were by Charles.

Although his church was big, it was poor. Finances were always a problem. Was it from personal experience that he penned stanza two of “We’ll Understand it Better By and By”?

Charles died in 1933 when gangrene set in to a foot injury. The victorious pastor was 82.

The Era of the Ungrateful American »
« Children of God