The Era of the Ungrateful American

Freedom of speech is of course one of the founding principles of the GREAT Nation, yet more and more we see actors, athletes and even politicians using this privilege, to say “I hate America”.  They have no real (substantiated) reason just a hate for America fueled by the media who owes allegiance only to the dollar. This is the same America that did not throw them (and their families) in prison for their words and gave them the opportunities that made them what they are today. As someone who fought and served to maintain those freedoms I can not fathom these acts. Is it for personal attention, I mean they remind me of a spoiled child.  So my message is simple. If you hate the hand that feeds you so badly, LEAVE IT! – Mike 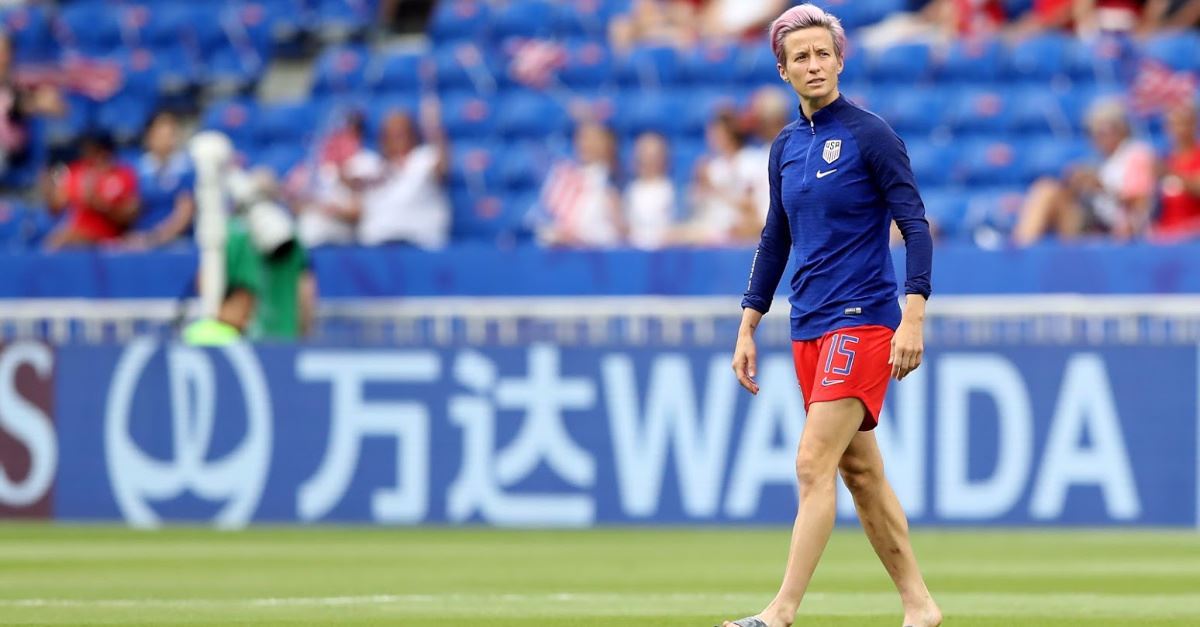 Talk about biting the hand that feeds you. I can’t fathom the ingratitude of American soccer star Meghan Rapinoe’s attitude toward America.

Writer Warner Todd Huston notes, “Rapinoe raised eyebrows in the 2018 season by taking a knee during the playing of the national anthem even though she is playing for the U.S. Women’s National soccer team. Her taking a knee only came to an end starting in the 2019 season because the team passed a rule requiring players to stand during the anthem. But she right away said that she would never sing the ‘Star Spangled Banner’ again, nor would she place her hand over her heart because she hates America.”

Sadly, she is by no means alone. There are millions of ungrateful Americans today.

I remember years ago seeing one of The Far Side cartoons by Gary Larson which showed one dog in his den showing another dog his mounted, stuffed trophies on his wall. There were a couple of stuffed cat heads and bird heads and also a human hand mounted on the wall. The host dog was saying to his guest, “And that’s the hand that fed me.”

What a fascinating contrast. Last week a man and his infant daughter tragically drowned trying to get to this country through illegal means. And yet the soccer star who was born here has nothing but contempt for the land of opportunity that has given her so many opportunities.

This reminds me of people who are ungrateful to the Lord, even though every beat of their heart is by His grace. When He says, “Enough,” it is over and then comes the judgment.

President Lincoln reminded us of our need for thankfulness to God when he called for a day of fasting and prayer during the conflict that tore this country apart.

On March 30, 1863, he wrote, “We have been the recipients of the choicest bounties of Heaven ….But we have forgotten God. We have forgotten the gracious hand which preserved us in peace, and multiplied and enriched and strengthened us; and we have vainly imagined, in the deceitfulness of our hearts, that all these blessings were produced by some superior wisdom and virtue of our own.” [Emphasis added]

Our own prosperity as a nation has caused us to forget the Lord, said our 16th president: “Intoxicated with unbroken success, we have become too self-sufficient to feel the necessity of redeeming and preserving grace, too proud to pray to the God that made us!”

With another Fourth of July upon us, I think it is a good time to recall why we should be grateful as Americans. This country was born through the sacrifices of those who went before us.

What is the Fourth of July? It commemorates that date in 1776 when 56 men in Philadelphia, representing three million people, agreed by voice vote to adopt the final wording of our national birth certificate, the Declaration of Independence.

They knew their lives were on the line by voting for independence from England, and a handful of them paid the ultimate price for this declaration. Several of them were specifically targeted by the British.

This declaration came years after futile attempts to work with the king to bring about an acceptable peace. But as the “men of Boston” put it, according to the great 19th century historian, George Bancroft: “While America is still on her knees, the king aims a dagger at her heart.”

We seem to forget the sacrifices of the founding fathers who bequeathed the freedoms, and subsequently, the prosperity we enjoy in this country.

A key founding father John Adams declared: “It is the will of heaven that the two countries should be sundered forever…” America would become its own nation, separate from England.

Adams adds that if we have to endure hardship because of it, God will still help see us through: “[I]t may be the will of heaven that America shall suffer calamities still more wasting and distresses yet more dreadful. If this is to be the case, the furnace of affliction produces refinement in states as well as individuals; but I submit all my hopes and fears to an overruling Providence, in which, unfashionable as the faith may be, I firmly believe.”

The men who birthed America and declared independence laid everything on line, as they trusted in God.

Why should Meghan Rapinhoe be grateful? Because she was born in a country which gave her opportunity to “write her own script” as some might put it. It is hard for me to comprehend ungrateful Americans.