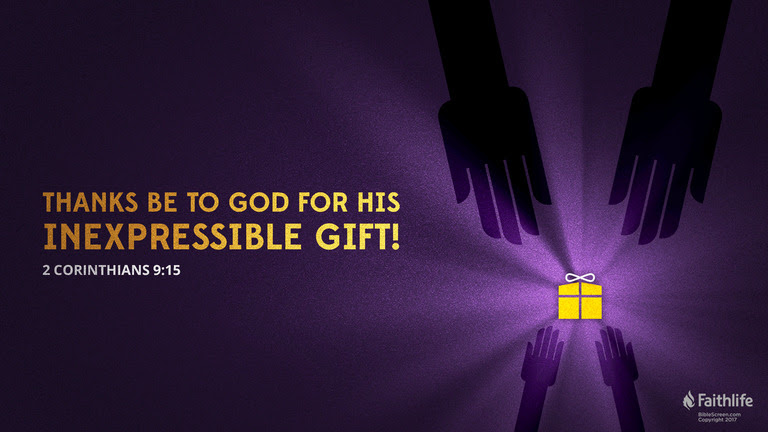 In short, this Chapter is a reminder to the church in Corinth to fulfill their promise to help the church in Jerusalem.  Paul reminds them that gift-giving should be done willingly and cheerfully, that God blesses those who do so and closes with our ext v.15.

Paul uses v.15, as a reminder that they, the members of the church in Corinth had already received a very special gift.  The CSB, NASB, and NIV all render it “his indescribable gift!”  The ESV is depicted above the KJV uses “unspeakable and the NLT renders it “this gift too wonderful for words!”

What is this gift?  It is interesting (to me at least) here Paul does not clearly spell it out, one has to dig a little, I think he understood the church at Corinth should know and so should all true believers. A clue is given in the previous Chapter 8:9 (AMP)For you are recognizing [more clearly] the grace of our Lord Jesus Christ [His astonishing kindness, His generosity, His gracious favor], that though He was rich, yet for your sake, He became poor, so that by His poverty you might become rich (abundantly blessed).  The Gift that goes beyond measure is none other than Christ.

It will be a blessed improvement from this Chapter, Under the Lord’s teaching, to learn, while Paul is speaking of alms-deeds, and liberality to the poor; how pure that source of real charity is, which runs from God, and leads to God. What an astonishment would it induce in the minds of some men, if they were told, that as no alms-giving whatever is real charity, unless it ariseth, as a stream doth from a fountain, from the love of God; the numberless public charities as they are called, which have not this origin for their birth, cease to be real charities; and will be found more the effect of pride, and ostentation, than either intended for divine glory, or human happiness. If all the actions of men on the score of charity, were ascertained by this standard, what a draw-back would be found, in the calculations of self-righteous Pharisees, of their real state before God? Reader! do attend to the Apostle’s character of the love of the heart, in that which comes from God, and leads to God. God loveth a cheerful giver. Not simply self-delight, in the deed; for this is often the choicest fruit the self-righteous character gathers, from his charity, in the offering made to the shrine of his vanity: but a cheerful giver to the Lord, of his own bounty, as the Lord’s Almoner. Cheerful in seeing the Lord’s poor, fed from the Lord’s gifts; in which self hath no gratification of pride, but feels humility. Here it is, the cup of cold water becomes a precious gift. And the hundreds of the affluent, given without it, hath no value in the sight of God.

But, Reader! if things be so, think what a gift was, and is, that which flowed, and will forever be flowing, from the free, pure, disinterested love of God, in the gift of his dear Son? Think, what a sovereign, unlooked-for, boundless, bottomless mercy, in the gift of God the Spirit! Oh! for grace to have a right apprehension, of this unspeakable gift!