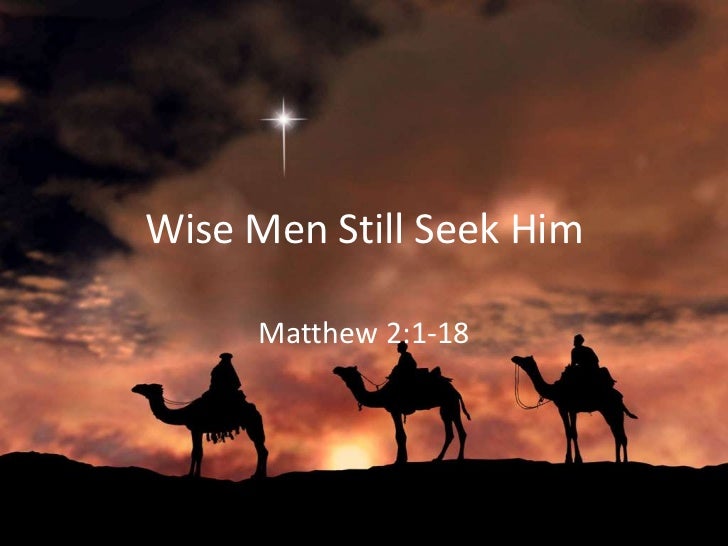 In it’s simplest form our text for today can be broken into two(2) sections. First v.1-8, the Wise Men seek after the newborn King (Christ).  Secondly v.9-12 we see them worshipping the Christ child.

Those who live at the greatest distance from the means of grace often use most diligence, and learn to know the most of Christ and his salvation. But no curious arts, or mere human learning, can direct men unto him. We must learn of Christ by attending to the word of God, as a light that shineth in a dark place, and by seeking the teaching of the Holy Spirit. And those in whose hearts the day-star is risen, to give them any thing of the knowledge of Christ, make it their business to worship him. Though Herod was very old, and never had shown affection for his family, and was not himself likely to live till a new-born infant had grown up to manhood, he began to be troubled with the dread of a rival. He understood not the spiritual nature of the Messiah’s kingdom. Let us beware of a dead faith. A man may be persuaded of many truths, and yet may hate them, because they interfere with his ambition, or sinful indulgences. Such a belief will make him uneasy, and the more resolved to oppose the truth and the cause of God; and he may be foolish enough to hope for success therein.

What joy these wise men felt upon this sight of the star, none know so well as those who, after a long and melancholy night of temptation and desertion, under the power of a spirit of bondage, at length receive the Spirit of adoption, witnessing with their spirits that they are the children of God. We may well think what a disappointment it was to them, when they found a cottage was his palace, and his own poor mother the only attendant he had. However, these wise men did not think themselves baffled; but having found the King they sought, they presented their gifts to him. The humble inquirer after Christ will not be stumbled at finding him and his disciples in obscure cottages, after having in vain sought them in palaces and populous cities. Is a soul busy, seeking after Christ? Would it worship him, and does it say, Alas! I am a foolish and poor creature, and have nothing to offer? Nothing! Hast thou not a heart, though unworthy of him, dark, hard, and foul? Give it to him as it is, and be willing that he use and dispose of it as it pleases him; he will take it, and will make it better, and thou shalt never repent having given it to him. He shall frame it to his own likeness, and will give thee himself, and be thine for ever. The gifts the wise men presented were gold, frankincense, and myrrh. Providence sent these as a seasonable relief to Joseph and Mary in their present poor condition. Thus our heavenly Father, who knows what his children need, uses some as stewards to supply the wants of others, and can provide for them, even from the ends of the earth.

This carol is an anonymous folk song, probably from the seventeenth century. Its text was first printed in nine stanzas by Davies Gilbert in Some Ancient Christmas Carols (1823). Most modern hymnals use six of these nine stanzas, eliminating the fifth, seventh, and ninth from Gilbert’s text. The second stanza is historically inaccurate, because it implies that the shepherds followed the star, while it was actually the wise men. Most hymnals leave this stanza intact, but a few correct the first line or omit the whole stanza to avoid this issue. Otherwise, the biggest discrepancy is in the spelling of “Noel.” The English form is “Nowell,” which is retained in about half the hymnals. The other half use the French form “Noel.” Whichever form is used, the word ultimately derives from the Latin “natalis,” meaning “birth.”

The carol tells a story loosely based on the Gospel accounts in Luke 2 and Matthew 2 of the events surrounding Jesus’ birth, with the shepherds, the star, and the wise men. The first two lines of the final stanza calls us to action – as the wise men reverently worshiped the Christ, so we should “with one accord sing praises to our heavenly Lord.” The last two lines recall that our Lord is the Creator and the Savior of the world.– Hymary.org

While not being 100% biblically accurate it never the less imposes upon us an important lesson. All Wiseman, even those who know not Christ as of yet as Lord and Savior should seek His truths.  Please pray for those who the bible calls “stiff-necked” and refuse to yield to the Holy Spirit’s call.

Do you know all 9 verses of ‘The First Nowell’? | CBC Music