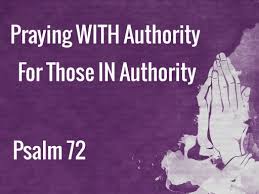 CONTEXT: The Seventy-second Psalm contains a description of an exalted king, and of the blessings of his reign. These blessings are of such a nature as to prove that the subject of the Psalm must be a divine person.
1. His kingdom is to be everlasting.
2. Universal.
3. It secures perfect peace with God and goodwill among men.
4. All men are to be brought to submit to him through love.
5. In him all the nations of the earth are to be blessed; i.e., as we are distinctly taught in Ga 3:16, it is in him that all the blessings of redemption are to come upon the world. Charles Hodge, in “Systematic Theology.” 1871.

This royal psalm is a prayer for the prosperity of God’s anointed king. As he prays that God would bless the king, the psalmist also prays that God would bless the nation as a whole. He asks God to give the king the virtues of justice and righteousness so he would be able to judge the people (vv. 1–2). He prays for national prosperity, as well as justice and freedom from oppression (vv. 3–4). He also asks that the nation would fear (revere) God and that righteousness and peace will abound (vv. 5–7), then prays that the king would have military success, and finally requests that other nations would honor him with gifts and tribute (vv. 8–11). The psalmist praises the king’s protection of the impoverished and needy (vv. 12–14) before concluding with a prayer for the life of the king and the prosperity of the promised land (vv. 15–17). The final section (vv. 18–20) is a doxology that concludes Book Two of the Psalms. – Faithlife Study Bible

Perhaps the greatest petition made by Solomon and one we should be concerning ourselves with frequently in the times we live in today is found in verse 11; May all kings fall down before him, all nations serve him!

What greater prayer could we in America have in these turbulent times? I have repeated this many times, America is NOT a Christian Nation, but we were most definitely founded upon Christian-Judeo principles found in the Holy Bible. One can deny this all they want but that is all they are a denier  and either ill informed or a liar.

It is those principles that for the first 175 years of our existence bound this country together. Unfortunately since then we have been on a steady and systematic pace to eradicate any and all such references.

Yet no matter God is sovereign and in control, He will have whom He choses in the White House and that is that. America has had plenty of opportunity to turn from (repent) its evil (abortion, LGBTQ, , etc. ) now I fear all we have left to do is pray and suffer the consequences.

So Pray as Solomon, Pray all leaders will fall down before Him.