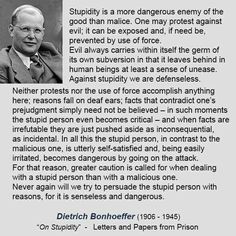 What led Dietrich Bonhoeffer to prison and writing about “stupid people?” The story begins back in 1933 with the rise of the Nazi party beginning back in 1930 and culminating with Hitler becoming supreme ruler in 1934.  By 1937 all pretense of civility in government had vanished (government officials decided they could better “handle the affairs of the people, sound familiar) and clergy like Bonhoeffer were told to get on board with the Nazi party platform or else.  Bonhoeffer chose the or else and in 1945 was executed.

A Psalm of Judgment or of Vengeance?

In response to the Nazi party arresting key church leaders in 1937 Bonhoeffer preached a sermon on Psalm 58 immediately following their arrests. One fact I found interesting was Bonhoeffer a Lutheran pastor did not have Psalm 58 in his Lutheran book of liturgy as it was considered a Psalm of Vengeance and therefore something not to be recited and considered.

Bonhoeffer was never one to be deterred and ever mindful of the event and evil around him chose Psalm 58 to call upon God not for hateful Vengeance but Righteous Judgement. He made clear that the Psalm calls us to leave vengeance in the hands of God. This he did at Calvary, and Righteous Judgement which is all we can ask for those that oppress us  is God’s work, not ours. Bonhoeffer made this clear for his own church under Nazi oppression:

It would mean much if we would learn that we must earnestly pray to God in such distress and that whoever entrusts revenge to God dismisses any thought of ever taking revenge himself. Whoever does take revenge himself still does not know whom he is up against and still wants to take charge of the cause by himself. But whoever leaves revenge in God’s hands alone has become willing to suffer and bear it patiently-without vengeance, without a thought of one’s own revenge, without hate and without protest; such a person is meek, peaceable, and loves his enemies. God’s cause has become more important to him than his own sufferings. He knows God will win the victory in the end. “Vengeance is mine, says the Lord, I will retaliate” (Deut. 32:35)-and he will retaliate. But we are free from vengeance and retribution. Only the person who is totally free of his own desire for revenge and free of hate and who is sure not to use his prayers to satisfy his own lust for revenge-only such a person can pray with a pure heart: ‘Shatter the fangs of the young lions, O Lord, break the teeth in their mouth’.

What a prayer what a blessing to be able to stand before God some day and have Him declare  My cause was more important to you than your own sufferings.  How are you handling adversity today?

In his sermon on Psalm 58, Bonhoeffer comments that this particular “psalm of vengeance is the prayer of the innocent.”33  Who are the innocent?  Following his strict view of prayer, Bonhoeffer answers this question: “we sinners do not pray this psalm of vengeance, innocence alone prays with this psalm.”34  What, or whom, is this “innocence alone”?  Bonhoeffer reasons that the “innocence of Christ steps before the world and accuses it.  And when Christ accuses the world of sin, are we not ourselves also among the accused?”35  We find answers to these questions in Bonhoeffer’s verse-by-verse commentary of Psalm 58.

Psalm 58:1 – “Are you then dumb, that you will not speak what is right, and judge the children of men with equity?”  Bonhoeffer focuses upon the word, “children,” and equates the meaning of children in this verse with “the poor and afflicted.”  He does not perform a logic of substitution; he thinks that the verse means children, but it also involves “the poor and afflicted.”  He understands the lack of “equity” as forms of injustice, and all forms of injustice lead to (what he calls) “an evil time.”  In this “evil time,” the unjust remain silent in the face of their own inequities/injustices.  Because the children – the poor and afflicted – are children of God, then God becomes vengeful toward the unjust.36

Psalm 58:2 – “No; you devise evil in your hearts, and your hands deal out violence in the land.”  Bonhoeffer argues that political authorities tend toward silence concerning injustice while simultaneously continuing acts of violence.  While the rest of us blame political authorities for this problem, all of us are at fault because we continue in our sinful human nature.  The innocence of Christ means that all of us stand under God’s judgment.37

Psalm 58:3 – “The wicked are perverse from the womb; liars go astray from their birth.”  Bonhoeffer contrasts “the wicked” from the category of innocence, and he explains how innocence responds to “the wicked.”  He claims that only innocence grasps the dark mysteries of the world; only innocence understands how Satan takes hold of human beings in the womb, even before our births; and in “this abyss of understanding,” innocence alone “achieves perfect peace.”  Bonhoeffer’s interpretive strategy for this verse involves making his own contrast between the innocent and the wicked and then commenting upon what innocence achieves and accomplishes in relation to the results of the wicked.  There are two ways to take Bonhoeffer’s interpretive strategy.  First, we might make the judgment that Bonhoeffer misinterprets the verse – that he is not careful exegetically – because he comments upon his forced or invented distinction rather than the content and words of the verse.  Alternatively, we might recognize that Bonhoeffer interprets this difficult verse in light of the virtue of hope.  The verse, on its own, welcomes despair.  Bonhoeffer does not counter the content of the verse; rather, for purposes of a Christian sermon, he displays hopefulness in his act of interpretation.38

Psalm 58:4 & 5 – “They are venomous as a serpent, they are like the deaf adder which stops its ears, which does not heed the voice of the charmer, no matter how skillful his charming.”  Bonhoeffer’s explanation of these two verses is quite simple: he argues that these verses prove that no human craft or skill can defeat the serpent.  The only practice that humans have that works is the act of prayer.  Through prayer, we call upon God “to take vengeance against the enemies.”39

Psalm 58:6 – “O God, break their teeth in their mouths; pull the fangs of the young lions, O Lord.”  According to Bonhoeffer, once we call upon the vengeance of God, we necessarily renounce our own quest for vengeance.  How do we know that we seek God’s vengeance and not our own vengeance?  Bonhoeffer writes, “the [person] who consigns vengeance to God alone is prepared to suffer and to endure, without a thought of [their] own revenge, without hatred or recrimination.”  This person becomes “gentle in spirit, peaceable, loving the enemy.”40

Psalm 58:7-9 – “Let them vanish like water that runs off; let the arrows they aim break into two.  Let them be like the snail that melts away, like stillborn child that sees the sun.  Before they bear fruit, let them be cut down like a brier; like the thorns and thistles let them be swept away.”  How do we know that the vengeance is God’s and not ours?  Our human strategies and weapons will not work in the ways that we craft and plan.  If we do not fight our enemies in the ways that we arrange and desire, then “God’s anger will not allow the plans of his enemies to come to fruition.”  The “wicked will be swept away with force.” The force might be implemented through us, but it will be “God’s punishment.”41  Lastly, it will come about “more quickly than we anticipate” with our own military strategies and weapons.42

Psalm 58:10 – “The righteous will be glad when they see the vengeance; they will bathe their feet in the blood of the wicked.”  Interpreting this verse invites immoderate celebration in victory (what we call jus post bellum, standards of justice after war), as well as different forms of self-deception concerning justice and righteousness.  Bonhoeffer’s interpretation attempts to hold off both of these temptations.  He writes, “This [verse] concerns God and his righteousness only.  The wicked must die so that God’s righteousness may triumph.  This does not have to do with human friendship and human compassion.  It has to do only with God maintaining the victory.”  At this point in his interpretation, Bonhoeffer turns to a robust Christological reading of Psalm 58: “God’s righteous vengeance on the wicked has already been achieved.  The blood of the wicked has already flowed.  God’s judgment on death upon godless humanity has been spoken.  God’s righteousness is fulfilled on the cross of Christ.”  He continues, “Jesus Christ died the death of the godless; he was stricken by God’s wrath and vengeance.  His blood is the blood which God’s righteousness required for the transgression of his commandments.  God’s vengeance has been carried out in the midst of the earth in a manner more fearful than even this psalm knows about.  Christ, the innocent, died the death of the wicked, so that we need not die.”  Bonhoeffer concludes his interpretation of this verse with the claim: “Christ bore the whole vengeance of God for all.” For Bonhoeffer, a Christological interpretation of this psalm prevents the self-deception of thinking that we are “the righteous” who “will be glad when they see the vengeance.”  All of humanity remain in the category of “the wicked,” and Jesus Christ – “the innocent” – dies for “the wicked.”  While humanity ought to be glad, through gratitude toward the redemptive work of Jesus Christ, our gladness does not come from our own righteousness.  Instead, it comes from the recognition that even in our wickedness, Jesus Christ died for us.43

Psalm 58:11 – “And they will say, ‘Surely, there is a reward for the righteous; surely, there is a God who rules in the earth’.”  Bonhoeffer maintains his Christological interpretation of this verse and says that when we find ourselves doubting “God’s righteousness upon [the] earth,” we should “look upon the cross of Christ: [where] there is judgment, there is pardon.”  Bonhoeffer returns to the question of how this psalm becomes a prayer that Christians must declare and recite.  He writes, “Christ prays this psalm as our representative.  He accuses the wicked, he calls down upon them God’s vengeance and his righteousness, and he gives himself for all the wicked in his innocent suffering on the cross.”  He continues, “And now we too pray this psalm with him, in humble thanks that we have been granted deliverance from wrath through the cross of Christ; in the fervent plea that God will bring all of our enemies under the cross of Christ and grant them grace; in the burning desire that the day may soon come in which Christ visibly triumphs over his enemies and establishes his kingdom.  Thus have we learned to pray this psalm.”44  If Christians believe in the redemptive work of Jesus Christ on the cross, then they should pray this psalm, and the psalms of vengeance in general.  Our own insecurities and self-deception prevent us from praying these psalms in our liturgies and our prayer books, because these Psalms bluntly and honestly remind us of “who we are,” who Christ is, and what Christ accomplishes for us.45

¹ = THE JOURNAL OF SCRIPTURAL REASONING