The saying below has become very popular on Social Media and among evangelicals in general but is it Biblical? Today we will briefly look at God’s Called. 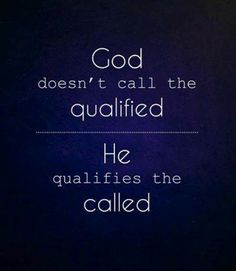 As always we must take into consideration the Whole Counsel of God. Failure to do so even in this instance could lead to false or heretical teachings as you will see.

So first let us look at the saying does God call unqualified folks. If we are speaking in the terms of Salvation, YES, of course our text will prove that.

On the other hand if we are speaking of ministry the answer is SORT OF. A careful reading of other bible text lists pre-qualifications for; Pastors, Deacons, Evangelists, etc. 1 Tim. 3:1-13, Tit. 1:5-9 then God further qualifies these chosen men through their study 2 Timothy 2:15 of scripture. To call someone to Pastor a church ignoring these qualifications is the same as saying God’s Word does not apply to our church and that is false teaching and HERESY, a term I never use lightly.

Our text this morning,  1 Corinthians 1:26-31, comes from Paul’s first letter to the church at Corinth. This is a church divided by two factions one I will call the Arrogant and Well Off, the other the Humble and Poor.

A breakdown of 1st Corinthians 1 is as follows:

In v.1-3 Greetings and Salutations to the church

In v.4-9 He thanks God for Christ and the fellowship therein

In v.10-17 He makes a plea for unity amongst the body of believers

In v.18-25 He describes the Power and Wisdom of Christ

In v.26-31 He closes by reminding the Corinthians of their lowly state before Christ

25 Because the foolishness of God is wiser than men; and the weakness of God is stronger than men. – Paul begins to closes chapter one, by insulting the church at Corinth. Seriously there is no other way I can read this, he is not pulling punches to lovingly sugar coating anything. WARNING; do not read into the text; Paul is not implying God is foolish or weak; he is implying that the those who think God is such a Greek, Moron, for sacrificing His only begotten son are the truly week and follish.

26 For ye see your calling, brethren, how that not many wise men after the flesh, not many mighty, not many noble, are called: – Look at your own calling to Salvation, and those around you in the church, how many are of the high and mighty the intellectual elite (prior to conversion did they have that distinction?). Paul points out it is the rare rich noble that believes in Christ.

28 And base things of the world, and things which are despised, hath God chosen, yea, and things which are not, to bring to nought things that are: – The Greek word here translated in the KJV as base things, is the word Nothing.  Paul says God calls the nothings of the world (modern word would be insignificant) to Christ. He uses the nobodies to shame the somebodies.

29 That no flesh should glory in his presence. – WHY? The answer is simple so no one can brag about themselves in God’s presence. As stupid as that sounds I am convinced there are those who try when they day comes when we all stand before God on judgement day.

30 But of him are ye in Christ Jesus, who of God is made unto us wisdom, and righteousness, and sanctification, and redemption: –  Not only do true believers not boast in themselves they understand that God is the source of our Life in Christ.

31 That, according as it is written, He that glorieth, let him glory in the Lord. – Paul is quoting Jeremiah 9:23-24 here, and makes it clear if you need boast boast in the Lord.

Paul makes clear in his writing to the church at Corinth that God is please to Call the foolish and weak, that truly believe the Gospel of Christ and Him Crucified. God purposely chose the base or insignificant as far as “the world” was concerned just to prove to who in the end is really foolish and weak.

The Question is are you to High and Mighty to heed God’s Call?