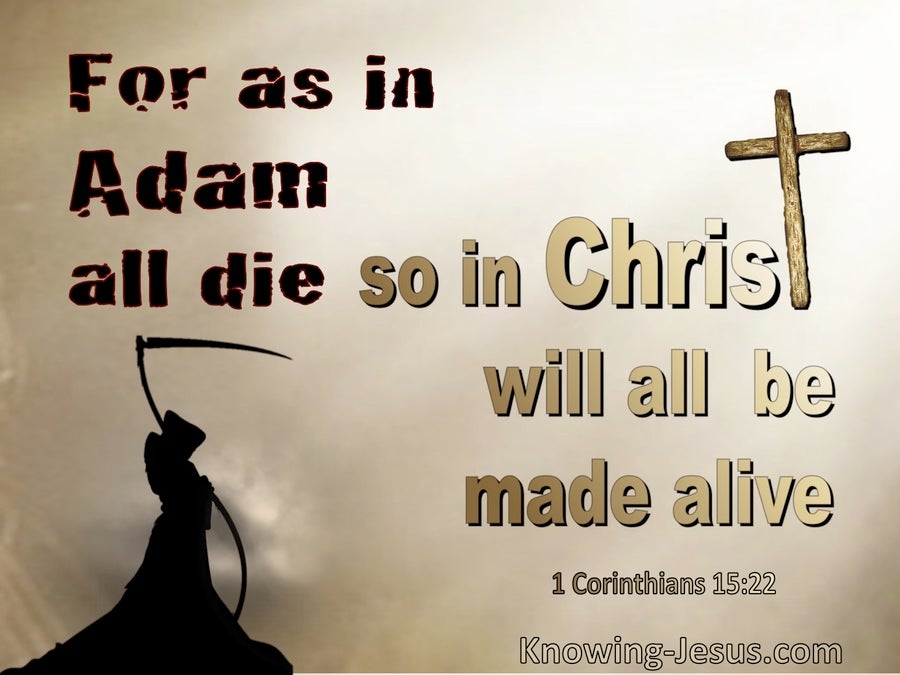 Yesterday in our devotional Blame Game we can trace the history of blaming others back to Adam and Eve (Gen 3:12-13). But the consequences of their actions were far greater than that, instead of peace and good health with eternal life in the Garden of Eden they brought about sin, disease, and DEATH. Genesis 3:16-19.

Here in 1st Corinthians Chapter 15 the Apostle Paul begins by laying out the facts of Christ’s resurrection: 1 Corinthians 15:1-11. He then proceeds to make the argument that if Christ has resurrected so too shall there be a resurrection of the dead 1 Corinthians 15:12-34. It is in the middle of this I wish to pull our text for today and explore God’s Holy word.

If in Christ we have hope[a] in this life only, we are of all people most to be pitied. 20 But in fact Christ has been raised from the dead, the firstfruits of those who have fallen asleep. 21 For as by a man came death, by a man has come also the resurrection of the dead. 22 For as in Adam all die, so also in Christ shall all be made alive. (ESV)

There was and still are cults that claim to be “christian” or claim some level of christian faith but deny the full deity and resurrection of Christ. Their desire or better put reason for being associated with Christ is worldly gain.

The second category and the one Paul is more likely writing about is all those who claim to be Christians, suffer for being so (remember Paul’s hardships) yet have no hope of eternal life.

we are of all people most to be pitied.

If either case is true of man what is left of them but to pity them? In the first man will live out his days and gain nothing for the Kingdom Matthew 6:19–21. In Paul’s case he would have willingly suffered for no reason at all for his hope was a lie. The original Greek here, eleeinoteroi, meaning pitiful or miserable combined with The whole of every kind of man.

v.20 But in fact Christ has been raised from the dead,

Okay, here are the facts, Christ has risen from the dead Matthew 28:6 so our hope is not in vain not to be pitied.

the firstfruits of those who have fallen asleep.

Firstfruits were the first of the harvest offered to God by the Jewish people. By using this term Paul insures the reader understand that Christ is the first of many believers to follow in God’s harvest of His chosen.

Remember it was Adam who brought sin and death into the world for all mankind. For anyone out there who is a naysayer claiming that’s not fair, why should I pay for something or be held accountable for something some guy did 6000+ years ago? If you look deeply at your true nature (apart from Christ) you know you would have done the same thing.

by a man has come also the resurrection of the dead

Jesus is the ONLY way, there is no other to eternal life.

Adam brought death, despair and helplessness into the world. A man of sorrows to be pitied

so also in Christ shall all be made alive.

Jesus brought comfort, hope and Life to all who believe upon him as Lord and Savior.

Are you to be pitied, is your hope in this life only today? Or are you to be counted among the saints …born again to a living hope through the resurrection of Jesus Christ from the dead, 4 to an inheritance that is imperishable, undefiled, and unfading, kept in heaven(1 Peter 1:3-4 ESV).