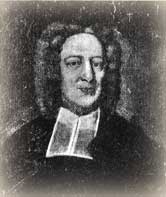 In every country there are family names which everyone recognizes, names which are keys to understanding that country’s history. For New England, such a name belonged to the Mathers.

Richard Mather brought the family seeds to America. A well-educated minister in the Church of England, he had been suspended from his pulpit for refusing to conform to the mandatory practices of the established church. He migrated to Boston in August 1635 where he became a Puritan pastor, exerting his influence not only from the pulpit but through production of the Bay Psalm Book. His son, Increase Mather, was likewise a pastor and author, whose life is closely intertwined with the history of Massachusetts. Perhaps his greatest service was to act as an agent of the colony in resisting Charles II’s revocation of its charter. He also served as president of Harvard and earned America’s first Doctor of Divinity degree.

The third person of this Mather trilogy was perhaps the most notable of all. Cotton was born on this date, February 12, 1663. Like his famous father and grandfather he entered the ministry. Acutely aware of sin in himself, from a young age he subjected his body to fasts and vigils and his mind to periodic self-examination. Six times a day he broke off business to pray and meditate. As a man he was unusually introspective. One wonders if he placed trust in works or in Christ. Sometimes he claimed direct illumination from God and at other times groaned or swooned. Often he felt plagued by demons.

Convinced from his own experience of the real power of Satan, he supported witch hunting. At the urging of the Salem court, he wrote Wonders of the Invisible World which described the Salem witch trials. It is unfortunate that he did not pay more heed to his father’s opposite views. Cotton’s name is forever blemished by the Salem witch trials, which show how badly superstition can warp an otherwise intelligent man.

For he was an intelligent man. 444 of his works were printed in his day, including a fascinating and valuable history of God’s workings in New England. The Royal Society of London elected him a member and read his scientific papers. The Christian Philosopher was his foray into apologetics. “The works of the Glorious GOD in the Creation of the World are what I now propose to exhibit; in brief Essays to enumerate some of them, that He may be glorified in them…” He quoted often from his large and valuable personal library.

Cotton was not merely a scholar. His pastoral care and rapport with troubled teens won admiration. He actively participated in the hour’s political roly poly, for example, justifying the seizure and imprisonment of the colonial governor Edmund Andros.

He died February 13, 1728. With him the Mathers fade from New England’s center stage. However, the first three were so great that their name remains inseparable from the history of the region.