Again this is another case of where the founders would be ashamed of what this once devout institution has become. – Mike

Charter for College of New Jersey 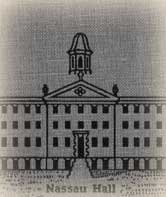 When William Tennent landed in Pennsylvania in 1716, after his long voyage from Scotland, he had no great plans for making a lasting impact on his new homeland. He was just a simple minister of the gospel. Yet, William Tennent’s influence would be greater than he himself ever imagined.

William served as a pastor of churches in New York and Pennsylvania. In 1726, he founded a “seminary” at Neshaminy, New Jersey to train his sons and others for a gospel ministry. Critics derisively called the school the “Log College” because of its frontier-like facilities, but the young men trained under Tennent became pastors of powerful influence.

One of William’s sons, Gilbert Tennent, became pastor of a Presbyterian church in New Brunswick. There he became friends with the Dutch Reformed pastor Theodore Frelinghuysen, who had been influenced by European pietists. Both pastors stressed the importance of the personal conversion to Christianity and life of holiness which should characterize each Christian. Gilbert Tennent especially spoke strongly against the lifeless profession of Christianity found in much of the church. He was annoyed with church members who equated a belief in the Bible with the conversion and saving faith of a Christian. Tennent believed that false doctrine and a denial of the faith were not the greatest danger at this time in the churches. More dangerous was the false security many had of professing Christianity, but never recognizing a personal need for redemption and deliverance from the terrors of judgment.

Under the teaching of Tennent and others from the Log College, a revival spread throughout the middle colonies. This was part of an international Protestant revival in the early eighteenth century which became known in America as the Great Awakening. When the famed English evangelist George Whitefield visited the Tennents and their Log College, he compared the school to an Old Testament school of the prophets where young men were trained to boldly speak the Word of God.

One of the men who had joined the Tennents in promoting revival was Jonathan Dickenson of Massachusetts. He became a pastor at Elizabethtown, New Jersey, where he ministered to both the spiritual and physical needs of his congregation, since he was also a medical doctor. When the New Jersey Presbyterian churches separated from the Synod of Philadelphia, Dickenson took advantage of the situation to apply for a charter for a College of New Jersey. On this day, October 22, 1746, the charter for the College of New Jersey was granted in the name of King George II. The school was unique in the colonies, as it accepted students of any religious denomination.

Dickenson became its first President, and many Log College men were on the Board of Trustees. Classes opened in Elizabethtown the next year, but Dickenson died within five months of the school’s opening. The Rev. Aaron Burr became the second President and the true founder of the college. Under his presidency, the college was moved to Princeton, and Nassau Hall built.

For its first two decades, the new college had difficulty keeping Presidents. Aaron Burr died in 1757. When Jonathan Edward succeeded him, he died within a few months from a smallpox inoculation. The next President, Samuel Davies, died within two years. Finally, in 1768, the Rev. John Witherspoon of Scotland was chosen as President. Recognized for scholarship in both Britain and America, Witherspoon led Princeton (as the college became known) to a place of prominence in the new American nation.