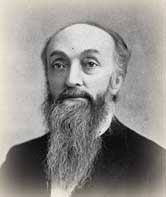 When you encounter Buddhists handing out in airport terminals and Eastern mysticism in all shapes within the New Age movement, you have an extraordinary event of the late 19th century to thank (or blame). The World’s Columbian Exposition, held in Chicago in honor of the 400th year of Columbus’ voyage to the New World, was not just a big trade fair. In addition to art exhibitions, and technical, engineering, transportation, architectural and other displays it called together a conference of world religious leaders.

This Parliament of World Religions opened on this day September 11, 1893. Its inspiration lay in the suggestion of a Swedenborgian, Charles C. Bonney. John Henry Barrows, one of Chicago’s most liberal clergymen, promoted the event. He claimed later that he had hoped leaders of world religions would be convinced of the superiority of Christianity.

Many Christians such as D. L. Moody refused to participate. Most Protestant evangelicals agreed with the response of the Archbishop of Canterbury that to participate was to presuppose the equality of religions. Salvation is in Christ alone, they protested. Nonetheless, the Roman Catholic Church sent delegates and as did some liberal Protestant denominations. Other representation included a dozen Buddhists, eight Hindus, two Shintoists, a Jain, a Taoist, a couple Muslims, some Confucians, and Zoroastrians.

The Parliament produced just about the results that evangelicals anticipated. The speeches were largely anti-Christian and denounced Christian missions as unchristian. To many people, Christianity began to seem just one among many equal alternatives. Some began to question if Asian faiths were not legitimate alternatives to Christianity. Many decided they were. Great interest was generated in Buddhism and Hinduism.

Swami Vivekananda of the Hindu tradition and Anagarika Dharmapala of the Buddhists toured the United States. The outcome was a Vedanta Society and a Buddhist society. D. T. Suzuki, a Buddhist, was dispatched to the United States by another attendee of the conference where he translated works into English and established a Zen presence, including America’s first Zen monasteries. Many other Eastern gurus, seeing ripe fields, have since set up shop in the United States and Americans have increasingly turned from traditional Christianity to homemade cults, many of which include motifs from Eastern religions.

As a consequence of this new exposure, Americans became more devoted to the idea of religious pluralism. And since the Columbian Exposition, Eastern religions and their symbols have increasingly infiltrated American thought. This, of course, presents a foundational challenge to the basic Judeo-Christian heritage of America with implications for the future identity and destiny of the nation.