Called as a Slave of Christ 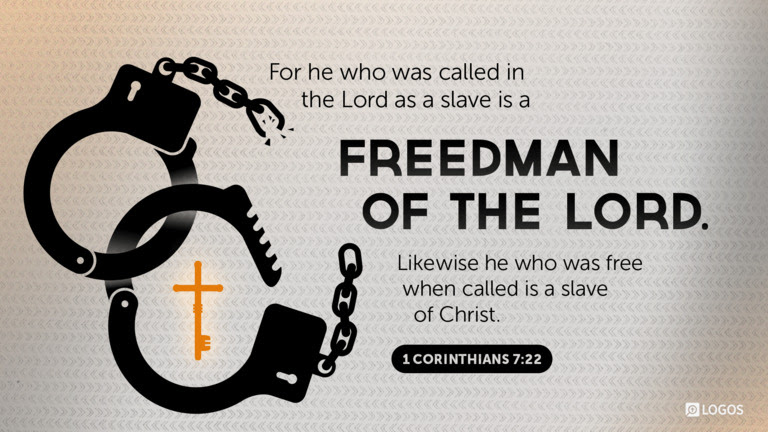 I am willing to bet (if as believers we were betting folks) that when we all read this the first time we did a double take. How many of us ever thought about willingly being a slave, with all its ugly connotations, for anyone? Yet Paul makes it clear a right relationship with our Lord and Savior Christ Jesus makes us Bond-servants (slaves) to Him.

I offer John Gills commentary on this verse to help in our understanding:

For he that is called in the Lord
Which is to be understood, not of any civil calling, or of calling to an office; or of the outward call by the ministry of the word only; but of an internal, special, powerful, evangelical, and saving call by the grace of God; which is of persons out of darkness into light, out of bondage into liberty, from their sinful companions to the company and society of Christ and his people, from off themselves and their own righteousness, to the grace and righteousness of Christ, and out of the world unto a kingdom and glory. And this may be said to be, in the Lord; either because it is by him, he is the efficient cause of it, his grace the moving cause, and his glory the end; or because it is in consequence of being in him, united to him, persons are first in the Lord, and then called by him; or because they are called into fellowship and communion with him; the whole is true, and make up the sense of the text; for he that is effectually called by grace, is called by the Lord, and by virtue of being chosen in him, and in union to him, and to partake of all the blessings of grace and glory that are with him. And such an one,

being a servant;
in a natural and civil sense when called, in a spiritual sense

is the Lord’s freeman;
he is free from sin, not from the being, but from the servitude, guilt, and damning power of it: he is free from Satan, not from his temptations and insults, but from his dominion and captivity; he is ransomed from him, by the redemption of Christ, and is turned from his power in conversion; he has not that influence over him he before had; and he is so safe and secure from him, that he can never be destroyed by him, and in a short time Satan will be bruised under his feet: he is free from the law, the observance of the ceremonial law, and all its numerous burdensome rites; and from the moral law, not from obedience to it, as in the hands of Christ, but from the bondage, curse, and condemnation of it, as ministered by Moses: he is free of the company of saints, of the church of God below, and of heaven, the city God has built and prepared for his; he is free to the use of all things indifferent, provided it is done in faith, the peace of weak brethren secured, and the glory of God preserved; he is free to all the privileges and immunities of the house of God, and to the throne of grace, come when he will; and therefore though a servant, in another sense he is a very happy man; he is free indeed, and can never be disenfranchanised, or arrested, or cast into prison; the various privileges he is free unto and enjoys, show him to be a happy man; and the effects following on his freedom prove it, as peace with God, the presence of Christ, joy in the Holy Ghost, fellowship with saints, and a well grounded hope of glory; he is not only called to the liberty of grace, which he enjoys, but will be delivered into the glorious liberty of the children of God; and therefore has no reason to be uneasy with his civil servitude: on the other hand,

likewise he that is called being free;
he that is called by the grace of God, with an holy and effectual calling, being a freeman, his own master, and it may be the master of others in a civil sense, he, in a spiritual one,

is Christ’s servant:
he is bought by Christ with his money, with the price of his blood; and therefore he has a right unto him, and a claim to his service; and he becomes a voluntary servant to him, through the power of his grace upon him; and though he serves his Lord Christ without mercenary views, freely, readily, and cheerfully, from a principle of love and gratitude, he shall not fail of a reward of grace; he shall be honoured of God, approved of men, and shall receive the reward of the inheritance: Christian liberty, and the service of Christ, are not at all inconsistent; nor should we entertain any other notions of liberty, but what are consistent with serving the Lord; whatever liberty contradicts, that is no true liberty; though it may have the face of it, it is no other than bondage.