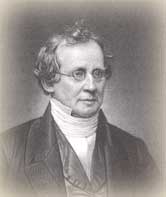 When Charles Hodge was asked to teach polemic theology* at Princeton, he kept quiet during the discussion. He did not think his own wishes should have anything to do with the matter; what the church wanted should come first. However, he wrote to his brother, “To you, however I may say in confidence, that I would give five thousand dollars, if I had them, to be let off. The new arrangement knocks all my plans in the head, and will increase my official labors for years to come fourfold.”

He was already burdened with work as the teacher of oriental and Bible literature, and of another theology course. Polemical theology would require him to deal directly with the controversies that divide Christians.

Once the appointment was made, however, he threw himself heart and soul into the effort. As a result, he became known as one of the greatest theologians America has produced. Near the beginning of his career he visited Europe and learned what he could from the most notable teachers and Bible critics of the day. In his mature years, he wrote a six-volume systematic theology. A Bible believer, he insisted that whereas others interpreted the Bible in light of philosophies or science, he would interpret philosophy and science in light of Scripture.

“The proposition ‘Thy word is truth’ is equivalent to, the Scriptures are true; all they teach concerning God, man, his character and state, his relation to God, concerning the person and work of Christ, the plan of salvation, the future life, and the future state of the Church is true. Everything conforms to what is real. Everything may be confidently relied upon. Nothing will ever disappoint legitimate expectation.”

Perhaps more than most men Charles looked to God as a father. His own father had died when he was six. His mother was a devout Christian and he came to know Christ as a young man. “As far back as I can remember, I had the habit of thanking God for everything I received, and asking him for everything I wanted. If I lost a book, or any of my play things, I prayed that I might find it. I prayed walking along the streets, in school and out of school, whether playing or studying. I thought of God as an everywhere-present Being, full of kindness and love, who would not be offended if children talked to him. I knew he cared for sparrows. I was as cheerful and happy as the birds and acted as they did…”

One of the nice things about Charles was that he didn’t reject people who disagreed with him. Too many theologians do. Warm and affectionate, he accepted as Christians those who loved Christ whether or not they were in agreement with his understanding of the Bible. “The experience of one Christian is the experience of all. This is the conscious bond of their union.” It is disappointing to note, however, that this great theologian supported slavery.

In May of 1878, Charles Hodge began to fail physically. His family gathered around him in June. Seeing one of his daughters crying, he reached out his hand to her and said, “Why should you grieve, daughter? To be absent from the body is to be with the Lord, to be with the Lord is to see the Lord, to see the Lord is to be like Him.” He died on this day, June 19, 1878. Three days later he was buried and all of Princeton’s businesses closed in his honor.