With seemingly all the 2020 Presidential candidates, on the left, ringing the morals bell (talk about your oxymoron since they all endorse murder AKA abortion) I thought this was very appropriate today. – Mike 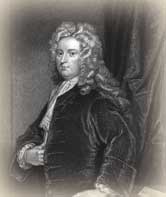 God raised up Mr. Addison and his associates to lash the prevailing vices and ridiculous and profane customs of this country, and to show the excellence of Christ and Christian institutions.” To win such praise from John Wesley, Joseph Addison must have exerted a great influence indeed.

God “raised up” Joseph Addison on this day, May 1, 1672. He was born in England near Amesbury in Wiltshire in the heart of Old Wessex, not far from the Avon River. His health at birth did not give much assurance he would survive long, and so he was baptized the same day.

Strong moral influences surrounded him as a youth. Through both parents he was related to clergymen. His mother was sister to the Bishop of Bristol and his father became Dean of Lichfield while Joseph was still a youngster. Richard Steele visited the Addison home and considered the affectionate peace of its atmosphere worthy of recording in an issue of the Tatler newspaper.

Trained to become a priest, he never took up his profession. Probably he would not have done well in the pulpit, for he was shy. Instead, the press became his pulpit. He had learned to write early and became one of the greatest stylists of the English language. His Latin poetry is considered among the best done by an Englishman. But his real fame comes from the “newspapers” he and Richard Steele produced together: The Tatler, The Spectator, and The Guardian.

These enjoyed a wide readership. The climate of the day was such that the majority of Englishmen actually cared to improve their manners and morals. Steele and Addison poked fun at annoyances large and small, such as giggling in church, thus becoming architects of public opinion. For The Spectator Addison invented a fictional character named Sir Roger de Coverly. Through Sir Roger The Spectator became the conscience of England. Addison’s lively anecdotes exposed folly and suggested better behavior. Although they risked failure by doing so, the two editors deliberately chose to avoid gossip and politics.

In addition to his satires, Addison wrote hymns which still find a place in our hymnbooks:

When all Thy mercies, O my God,
My rising soul surveys,
Transported with the view I’m lost
in wonder, love and praise.

On his deathbed, he was calm and courageous. He urged his nephew to “see how a Christian can die.” The excellence of his writing ensures that his memory will not soon perish, for his essays are often included in anthologies of English literature.