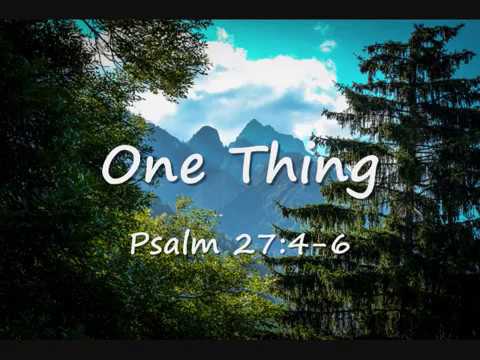 I do not thing God wants us to settle for “one thing” in our lives spiritually. I believe He expects us to reach a goal and then set a new one continually maturing and growing.  Yet the point of David’s prayer here in these verses is that his undivided focus will be on achieving the goal of, dwell[ing] in the house of the Lord [in His presence] all the days of my life, for it is  the very foundation of his faith.  David is not and neither should we be settling for one thing but focusing on on the one thing that matters most, God.

The Psalm as a whole can be broken down into 4 parts;

The poet first sounds forth his sure confidence in his God, Ps 27:1-3, and his love of communion with him, Ps 27:4-6. He then betakes himself to prayer, Ps 27:7-12, and concludes with an acknowledgment of the sustaining power of faith in his own case, and an exhortation to others to follow his example. Charles H. Spurgeon’s Treasury of David

I offer a few of the comments from Spurgeon’s Commentary for your edification:

v.1 The Lord is my light and my salvation; whom shall I fear? Alice Driver, martyr, at her examination, put all the doctors to silence, so that they had not a word to say, but one looked upon another; then she said, “Have you no more to say? God be honoured, you be not able to resist the Spirit of God, in me, a poor woman. I was an honest poor man’s daughter, never brought up at the University as you have seen; but I have driven the plough many a time before my father, I thank God; yet, notwithstanding, in the defence of God’s truth, and in the cause of my Master, Christ, by his grace I will set my foot against the foot of any of you all, in the maintenance and defence of the same; and if I had a thousand lives they should go for the payment thereof.” So the Chancellor condemned her, and she returned to the prison joyful. Charles Bradbury.

v.4 One thing have I desired of the Lord, etc. Seeing David would make but one request to God, why would he not make a greater? for, alas! what a poor request is this–to desire todwell in God’s house? and what to do? but only to see? and to see what? but only a beauty, a fading thing, at most but toenquire; and what is enquiring? but only to hear news; a vain fancy. And what cause in any of these why David should make it his request to God? But mark, O my soul, what goes with it! Take altogether —to behold the beauty of the Lord and to enquire in histemple. And now tell me, if there be, if there can be, any greater request to be made? any greater cause to be earnest about it? For though worldly beauty be a fading thing, yet “the beauty of theLord, “shall continue when the world shall fade away; and though enquiring after news be a vain fancy, yet to enquire in God’sTemple is the way to learn there is no new thing under the sun, and there it was that Solomon learned that “all is vanity.” Indeed, this “one thing, “that David desires, is in effect that unumnecessarium that Christ speaks of in the gospel; which Mary makes choice of there, as David doth here. Sir Richard Baker.

The house of the Lord. It (the tabernacle, the sanctuary), is called the house of God because he is present there, as a man delights to be present in his house. It is the place where God will be met withal. As a man will be found in his house, and there he will have suitors come to him, where he reveals his secrets. A man rests, he lies, and lodgeth in his house. Where is a man so familiar as in his house? and what other place hath he such care to protect and provide for as his house? and he lays up his treasures and his jewels in his house. So God lays up all the treasures of grace and comfort in the visible church. In the church he is to be spoken with as a man in his house. There he gives us sweet meetings; there are mutual, spiritual kisses. “Let him kiss me with the kisses of his mouth.” So 1:2. A man’s house is his castle, as we say, that he will protect and provide for. God will be sure to protect and provide for his church. Therefore he calls the church of God, that is, the tabernacle (that was the church at that time), the house of God. If we apply it to our times, that answers the tabernacle now is particular visible churches under particular pastors, where the means of salvation are set up. Particular visible churches now are God’s tabernacle. The church of the Jews was a national church. There was but one church, but one place, and one tabernacle; but now God hath erected particular tabernacles. Every particular church and congregation under one pastor, their meeting is the church of God, a several church independent. Richard Sibbes.

I pray today you have that focus fellowship with God that David so enjoyed.