Skip to content
This is my go to dictionary you can find real meanings of words here.
American Minute with Bill Federer
Noah Webster’s 1828 Dictionary: “The Christian religion is the most important and one of the first things in which all children … ought to be instructed 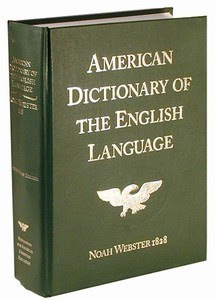 Noah Webster first published his American Dictionary of the English Language on APRIL 14, 1828.

In order to evaluate the etymology of words, he learned 26 languages, including: