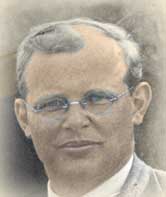 Where does a Christian fit in a nation which makes itself god?

The Lutheran theologian Deitrich Bonhoeffer answered that the Christian’s duty is to resist such a regime. This landed him in a concentration camp and cost him his life.

Safe in exile in America, he abruptly returned to Germany. “I have come to the conclusion that I have made a mistake in coming to America. I shall have no right to participate in the reconstruction of the Christian life in Germany after the war if I did not share in the trials of this time with my people. Christians in Germany face the terrible alternative of willing the defeat of their nation in order that civilization may survive, or willing the victory of their nation and thereby destroying civilization. I know which of these alternatives I must choose. But I cannot make that choice in security.”

In Germany Bonhoeffer worked with the underground resistance. He helped guide Jews to safety. Believing that Hitler was like a madman “driving a car into a group of innocent bystanders,” he joined a plot to kill the Führer.

After he was arrested for his aid to the Jews, his role in the plot was discovered. There was little hope he would survive Nazi wrath. Nonetheless Bonhoeffer was personally at peace. Suffering, he said, had become a better key for understanding the world than happiness had ever been.

On this day February 7, 1945, he was transferred to the terrible Buchenwald Concentration Camp where many thousands of prisoners died, some under cruel medical experiments. Three months later Bonhoeffer corpse was added to the list of dead. He was hanged days before the allies freed the camp. He had fulfilled his own theology, aptly expressed in his book The Cost of Discipleship: “The one thing that matters is practical obedience. That will resolve [man’s] difficulties and make him free to become the child of God.”

When the government usurps God’s place, what is the Christian to do? By his life and death, Bonhoeffer exemplified one solution. [We caution that scripture teaches it is not right to do evil that good may come.]