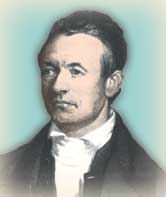 That kind of a honeymoon was that? Adoniram Judson and Anne Hasseltine were married one day. The next, they attended Adoniram’s ordination to mission work. This day, February 6, 1812 was one of the coldest days of the year. Heavy snow had fallen the night before as a cold front moved in. Despite the cold, fifteen hundred people converged from many miles around Salem to the barn-like Tabernacle Church where the ceremony would be held.

Some brought their children, thinking that someday they would want to say, “I saw America’s first foreign missionaries ordained.” Adoniram Judson is often called America’s first foreign missionary. This is only one-fifth true. He became the most famous of the men ordained that day, but four other Congregationalists (Samuel Nott, Samuel Newell, Gordon Hall, and Luther Rice) were set aside for missions with him and sailed for India that same year. And Judson’s wife Anne (Haseltine), “Nancy,” was beside him, too. Without her he would not have succeeded.

The service began at eleven. On a hard wooden settee, surrounded by dignitaries, sat the five young men who would soon say farewell to their homes and sail to the orient to tell others of Christ. In those days of slow travel, scant medical knowledge, and the dangers of sailing, the audience realized this might not only be an ordination but also a final farewell.

That the five were on the platform was largely a tribute to their own determination. While still students of Andover, they had agitated for the creation of the missionary society that was now sending them out. Now their mentors and supporters rose to speak.

After songs, Dr. Griffin gave a prayer during which the auditorium fell deathly still. Dr. Wood followed with the sermon, hoping to see the young men again at “the glorious appearing of the Son of God” when the fruits of their labors would be apparent.

Five ministers placed their hands on the heads of the five missionaries as Dr. Jedidiah Morse consecrated them. People wept during his prayer which was charged with a sense of farewell. When Dr. Spring charged the five to do their duty, he noted that it was a new and important enterprise that they undertook, before which every former effort of the American church retired “like stars before the rising sun.” Samuel Worcester inducted them into the brotherhood of the ministry and offered the right hand of fellowship. “Go carry to the poor heathen the good news of pardon, peace and eternal life. Tell them of the God whom we adore; of the Savior in whom we trust; of the glorious immortality for which we hope…” he said. The sun was well past its peak before Dr. Spring gave the closing prayer.

The sun had done little to warm the day, which was still bitterly cold. Students had to walk the sixteen miles back to Andover. One of them, Ephraim Newton, collapsed in the snow, and was found half-frozen by other students who hurried to carry him to a nearby house where he was revived in blankets near a fire.

Like the Judsons, Nott and Newell married shortly before sailing to Asia, and had little chance for a honeymoon. Days and evenings were lost in fundraising and meetings. Unfavorable winds delayed the sailing of the ship Caravan with the Judsons and Newells aboard. When they finally did sail, they almost foundered in a storm, the captain remarking that only Providence could save them. While at sea, Adoniram studied Bible teaching on baptism and became a Baptist.

The Judsons did not remain in India, but became missionaries in Burma where Anne’s support of her husband during a period of captivity saved his life and cost hers. Newell lost his wife and newborn daughter shortly after reaching India. Ill health compelled Rice to return to the United States. Nott worked for many years in India.