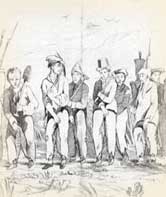 The convict nodded as he listened to the pretty girl who was leading him through the steps of salvation on this day, January 9, 1944.

Picking up the beautiful new Bible that she had just given him, Ed Martin wrote the date in the margin of John chapter 3. “I want to write the date here next to John 3:16, although I know I will never forget it.”

A small-time criminal, Edward Martin was considered incorrigible. He was sentenced to a chain gang in Virginia. The one time that he escaped, a reward of $10 was offered for him–dead or alive.

But then something happened. Ed had a sister who was a student at Practical Bible Training School. Edna Martin asked her roommate Alfreda Enders to pray for her brother who was in prison. Alfreda, preparing for the mission field, honored the request. But she did more than that; she wrote letters, explaining the gospel to Ed and giving him Scriptures to look up. Searching for the verses she mentioned in her letters, he learned to find them in camp #6’s very worn Bible. He wrote letters back to her that showed a growing spiritual awareness.

Finally Alfreda visited the prison camp. When she asked him point blank if he was saved, Ed dropped his eyes. “Well, Alfreda, the reason I’ve never said for sure is because I don’t know for sure.”

Alfreda explained the steps of the experience that Christians call the new birth. Being born into God’s family was similar to being born into a human family. First, just as a seed (the sperm) has to be planted in the womb before a child can begin to grow, so a seed (God’s word) has to enter the heart. Second, just as a mother nurtures the unborn child, so God has long planned the conditions for salvation. Third, just as the mother suffers while giving birth, so Christ suffered on the cross to bring us spiritual birth. Fourth, once the baby is born, it begins breathing. In the same way when we cry, “God, be merciful to me a sinner,” we draw our first breath as a spiritual baby.

At that point, Ed bowed his head. In a voice that could barely be heard, he prayed, “God, forgive my sins and save me for Jesus’ sake.” Immediately he believed he was saved. “Thank you, Lord. Thank you, Alfreda,” he said.

Alfreda went on to explain other steps of spiritual growth. After she left, Ed put them into practice. So great was the transformation in him that a guard eventually recommended him for parole. Alfreda and Ed married and began a family. Their married life was lived for God as they pastored a Pennsylvania church and then served as missionaries in Japan. When Ed’s health failed, they returned to the United States and founded a prison ministry called Hope Aglo.

When Ed died in 1994, it was to assume the eternal life he had found fifty years before. Alfreda continued their prison ministry.

Pro-Life News »
« More than a Feeling