The End for Evelyn “Granny” Brand 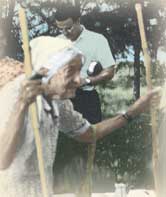 Tears streaking her cheeks, Evie Brand pleaded with her mission board. Rules were rules, they answered. She was too old to go back to India. She must retire.

Evie had sacrificed her comforts, her tiny income, her family for the work. With her husband, Jesse, she had pioneered on the Mountains of Death until he died of fever. Year after year, she lived entirely on a small inheritance and set aside her official salary to buy parcels of land for the mission. But the board said it made no sense to appoint a sixty-eight year old woman to another five year term.

Evie did not see it that way. Years ago, she and her husband Jesse had vowed to reach five mountain ranges with the gospel. Four still had to be reached. Evie felt that God intended for her to fulfill that vow. She saw one last chance. “Please just send me back for one year,” she pleaded. “I promise not to make any more trouble. At the end of one year I will retire.”

Reluctantly the board agreed. Had they known Evie’s secret plan, they would surely have refused. When her year with the mission ended, fellow missionaries gathered to wish her goodbye. Then came the shocker. Evie gleefully informed them that she was retiring from the mission– retiring to take up independent work in the mountains. She would fulfill the promise that she and Jesse had undertaken years before. Protests and warnings fell on deaf ears.

Rejoicing, seventy-year-old Evie began to fulfill Jesse’s dream. Everyone called her “Granny,” now, but she felt young. She traveled from village to village, riding a hill pony, camping, teaching, and dispensing medicine. She rescued abandoned children. The work was hard because her body was thin now. Life became even more difficult when she was dropped by her carriers and whacked her head on a rock. She never completely recovered her balance after that. She took to walking with bamboo canes in her hands. Yet the face that she turned upon the world was full of joy and laughter. “Praise God!” she exclaimed continually.

Despite broken bones and fevers, she labored on. In fifteen years, she almost eradicated Guinea worm from the Kalryan range. (Guinea worms grow several feet long under a person’s skin.) Through her efforts, the five ranges were evangelized, and a mission work planted on each. She added two more ranges. “Extraordinary,” said people. Granny insisted it was all God’s doing.

Whether on her mountains or off, she proclaimed Christ. In a hospital with a broken hip, she scooted on a carpet from room to room and talked to the other patients. She painted landscapes for them. Her bones knit in record time and back she went to the mountains to fight marijuana growers. Her son Paul visited her and found her looking not older but younger. “This is how to grow old,” he wrote. “Allow everything else to fall away, until those around you see just love.”

Granny tore some ligaments and had to go to the plains for treatment. Before she could return to her beloved mountains, her speech became jumbled and her memory failed. Seven days later, on this day, December 18th, 1974, she died. The next day her body was taken back to the hills and laid beside Jesse’s while a multitude wept. The woman who was considered too old for missions had carried on for twenty-four more years.