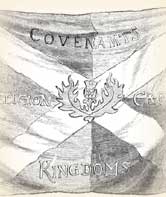 When John Wycliffe sent his barefoot preachers throughout England in the 14th-century, carrying the Scripture in English, and calling for real heart changes, his message crossed the border into Scotland. There Murdoch Nisbet heard and believed. He acquired one of the rare English-language manuscripts of the Bible. Murdoch’s son, grandson and great grandson followed his footsteps of faith. The great-grandson was John Nisbet of Hardhill. (A great-great grandson, James Nisbet wrote his story).

John fought for the Reform faith on the European continent during the Thirty Years’ War. Then he returned to his native Scotland and fought some more. King Charles II’s government drove hundreds of pastors from their pulpits and perpetrated many other outrages of a religious nature. This led a number of Scots to take up weapons. (Their theology taught that it was allowable to fight in preservation of religious freedom.)

In 1666 John marched with a group of Covenanters which was attacked on Rullion Green. Outnumbered four to one and short of weapons, the covenanters fought valiantly but suffered defeat. Wounded in seventeen places, John was left for dead. He recovered, and wandered as a fugitive for years. His brave wife and children were thrown out of their home and some died of hunger, cold and disease. Eventually, while at prayer with three others, John was attacked by a party of dragoons, led by one of his cousins. In the desperate fight that followed, he was wounded seven times. The men with him were shot through their heads on the spot, but John was kept alive because of the reward offered for him. Taken to Edinburgh, he was tried. He told his captors he would rather die than lie (by pretending to change his faith). He was condemned to death.

Despite his serious wounds, he was loaded with chains weighing 100 pounds. Under this harsh treatment, he rejoiced all the more, claiming he’d had a vision of God so intense it would have killed him if God hadn’t given him the strength to bear it. “It has pleased Him [God] to give me such real impression of unspeakable glory as without constant and immediate supports from the Giver will certainly overwhelm me,” he said.

He wrote his last will and testament. In it he said, “Be not afraid at His sweet, lovely and desirable cross, for although I have not been able because of my wounds to lift up or lay down my head [without help] yet I was never in better case all my life.”

On this day Friday, December 4, 1685, the soldiers led him to his execution. Witnesses said his face shone in anticipation of glory. He exclaimed, “I have longed these sixteen years to seal the precious cause and interest of precious Christ with my blood. And now, now He has answered and granted my request, and has left me no more ado but to come here and pour forth my last prayers, sing forth my last praise to Him…mount that ladder, and then I shall quickly get home to my Father’s House…”

On the scaffold, he preached a farewell sermon, urging the onlookers to prepare for the day of judgment. The soldiers did their best to drown his voice by beating their drums. John Nisbet sang a last psalm and they swung him off into eternity.

{Oh to be so brave for Christ in a time of such persecution.- Mike}