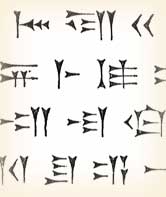 George Smith engraved bank notes by day. At night he studied newly discovered cuneiform tablets–clay writings dug up in the Middle East. After publishing several keen observations, George was appointed as an assistant at the British Museum.

That is how he stumbled across a fascinating find from the past. In a paper read before the Society of Biblical Archaeology in London on this day, December 3, 1872, George Smith announced the discovery of a flood story similar to, but differing in details from the Noah story of the Bible. This account was part of an early piece of poetry known as the Gilgamesh Epic.

London society was electrified! But Gilgamesh broke off at the crucial point. How did it end? The Times offered a large reward for anyone who could produce the missing tablets.

George Smith jumped at the chance. He thought he knew approximately where in Nineveh the original pieces had been found. That is where he started to dig. Incredibly, among the thousands of tablets strewn in the ruins, he found the missing pieces within a short time! He also found a long list of ancient kings.

The flood story was only one piece of the Gilgamesh Epic. Gilgamesh was a tough Middle Eastern king. To bring him into line, his dissatisfied subjects sicced a strong man on him. Gilgamesh and his enemy fought to a draw, after which they became close friends. But when the friend died of a horrible disease, Gilgamesh set out to look for the secret of immortality.

In his journey, he met Utnapishtim–the Noah of the Gilgamesh Epic. The elderly Utnapishtim told Gilgamesh the story of the flood. Warned by a god, Utnapishtim had made an ark and sealed it with pitch. Then he made his family go in and he shut the door. Right there we meet a difference from the Biblical account, for in the book of Genesis God shut the ark’s door.

Utnapishtim’s story says it rained six days; the Bible, forty. In the Bible account, the water covered the high mountains. In Utnapishtim’s account, it rose only to the roofs of the houses. After the waters receded, the Utnapishtim story described him releasing a dove, a sparrow and a crow. The Bible has Noah release a dove and a raven.

Immediately the opponents of the Bible jumped on the story as proof the Bible was wrong. Their reasoning had serious flaws in it. Far from disproving the flood, here was independent confirmation. (Today over 200 flood accounts are known from around the world.) The evidence suggests that Moses wrote the Genesis flood account based on an ancient event; Gilgamesh, however, seems to be a fictionalized version of the same historical event. We know this because several Gilgamesh versions have since been found, differing considerably from each another.

In tone, the two accounts could hardly be more different. Gilgamesh is the story of a boastful man who exalted himself, battling even with the gods after a goddess falls in love with him; Genesis, by contrast, tells the story of men favored by God because they accepted his premises and promises and obeyed him.

George Smith died of hunger and disease just four years after making his exciting discovery. He was only thirty-six.