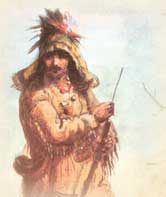 Jedidiah Strong Smith entered California’s San Bernardino Valley on this day, November 27, 1826, becoming the first American citizen known to have crossed the southwestern part of the American continent. Jedidiah was not your typical mountain man. He was tall, silent and never used tobacco or profanity. Reared a Methodist, he was a devout Christian who always remained a gentleman even in the wildest frontier company. He was cool under pressure, with strength and leadership ability that was grounded in his faith. Part of his reason for leading his rough life was to support his elderly parents.

As he explored the areas of the West, Smith filled his journal describing the wonders of God’s creation. When he faced hardship or peril, he looked to Scripture for strength. Once he was almost killed by a grizzly bear. His head was in the bear’s mouth and it chewed off his ear, but he managed to escape. As he waited for his men to arrive with help, he found comfort in the 23rd Psalm. Within a few days, Smith was again leading his expedition forward.

In 1826 Smith led an expedition to California in search of beaver. The farther west he went, the more difficult the journey became. His horses died, and the men had to cross the Mohave Indian country on foot. Whether he faced Indians, hunger, or thirst, Smith handled hardship by turning to the Lord in prayer. Smith was not only the first American to travel by land to California, but the first to cross the Great Basin and the first to reach Oregon by going up the coast of California.

Smith’s letters home to his relatives reflected his faith. In one he wrote that Jesus is always entreating us with His love, and uses every means except compulsion to bring us to Him, that we may have life more abundantly.