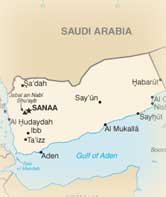 In the sixth century, the nation of Abyssinia (modern Ethiopia) dominated the kingdoms of Himyar and Yemen on the southern Arabian peninsula. There were flourishing Christian churches in the area (also known as Homerites) which looked to Christian Abyssinia for protection.

It happened that a Himyarite Jew, Yusuf As’ar (better known by nicknames referring to his braids or ponytail: Dhu Nuwas, Dzu Nuwas, Dounaas, or Masruq), seized the throne from his king and revolted against Abyssinia, seeking to throw the Ethiopians out of the country. He captured an Ethiopian garrison at Zafar and burned the church there and burned other Christian churches.

Christians were strongest at the North Yemen city called Najran (sometimes spelled Nagran or Nadjran). Dhu Nuwas attacked it. The Christians held the town with desperate valor. Dhu Nuwas found he could not capture it. And so he resorted to treachery. He swore that he would grant the Christians of Najran full amnesty if they would surrender. The Christians, knowing they could not hold out forever, yielded against the advice of their leader Arethas (Aretas or Harith).

What happened next was so appalling that Bishop Simeon of Beth Arsham (a Syrian) traveled to the site to interview eyewitnesses and write a report. “The Jews amassed all the martyr’s bones and brought them into the church where they heaped them up. They then brought in the priests, deacons, subdeacons, readers, and sons and daughters of the covenant…they filled the church from wall to wall, some 2,000 persons according to the men who came from Najran; then they piled wood all round the outside of the church and set light to it, thus burning the church with everyone inside it.”

In the ensuing week, hundreds more Christians were martyred, among them many godly women, who were killed with the most horrible tortures when they refused to renounce Christ. According to Simeon, many were told “Deny Christ and the cross and become Jewish like us; then you shall live.”

Versions differ as to date, but one says that it was on this day, November 25, 523, Dhu Nuwas took his vengeance on Arethas and 340 followers, killing them. These men were quickly included in martyr lists in the Greek, Latin and Russian churches. A song was even written about them by one Johannes Psaltes, although it reports only about 200 deaths.

Other accounts written within a century add that deep pits were dug, filled with combustible material, and set afire. Christians who refused to change faiths were hurled into the flame, thousands dying in this painful martyrdom. Some think that this is the event that the Koran refers to when it says, “Cursed be the diggers of the trench, who lighted the consuming fire and sat around it to watch the faithful being put to the torture!” although Muslim commentators deny this.

A wealthy lady named Ruhm was compelled to watch her virgin daughter and granddaughter executed and to taste their blood before she was killed herself. Asked how the blood tasted, she answered, “Like a pure, spotless offering.”

When word reached Constantinople, the Roman Emperor encouraged the Ethiopian king Ellesbaas (Ella Atsbeha or Kaleb) to intervene, as did the Patriarch of Alexandra. Ellesbaas was only too willing to do so, since his garrisons had been massacred and fellow Christians killed. He destroyed Dhu Nuwas and established a Christian kingdom. An Ethiopian-Jewish writing known as the Kebra Nagast regarded the downfall of Dhu Nuwas to be the final catastrophe for the Kingdom of Judah. Another Ethiopian book told the story of the massacre under the title The Book of the Himyarites.

The Chief Distinguishing Mark of a False Prophet »
« Have You Ever Felt So Broken?