The power of one man to change the lives of so many is demonstrated here. God chose the “impossible” to do the “improbable” all he had to do was answer the call and surrender all. – Mike 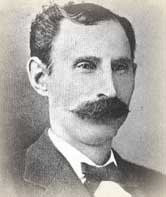 Jerry McAuley was a bad lot through and through, the kind of person we call “impossible.” Born in Ireland in 1839 he was raised by a grandma because his mother could not or would not care for him. Who his father was, he did not know. The grandma cursed him when he threw clods at her while she prayed her rosary.

Eventually she shunted him off to relatives in New York. He ran away from this home and lived by stealing–drifting in and out of prison. When he was nineteen, authorities, only too happy to get him off the street, convicted him on trumped up robbery charges. He was sentenced to fifteen years in Sing Sing prison. For the first time in his life, Jerry found himself obeying rules. He saw it as his one chance to regain freedom. He learned to read.

The event that transformed him from an “impossible” case to a soul winner was the testimony of a former pal who had become a Christian. Jerry wanted the hope he saw in Orville Gardner. He began reading the Bible and tried desperately to pray. Finally one night a supernatural presence appeared in his cell and a voice seemed to say, “Son, your sins which are many are forgiven.” McAuley did not change all at once. He still drank too much and fought. But that night he was converted.

Pardoned by Governor Horatio Seymour, he went free on March 8, 1864. After a renewal of his faith, Jerry McAuley began to work for God. He saved money and on this day, October 8, 1871, opened the Water Street mission in New York City to reclaim men like himself. Set in an old dance hall, it was the first rescue mission in the United States, the forerunner of many more.

Hundreds of men were turned from lives of sin and misery to hope in Christ. Jerry also inspired Emma Mott Whittemore to begin her Door of Hope mission for fallen women. Jerry’s life demonstrates the power of God to do the impossible: to change lives that are rotten to the core.