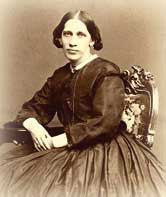 Psalm 46 declares, “God is my refuge, an ever present help in time of trouble.” There was once a young Swedish woman who, like the Psalmist, learned early in life to trust in the Lord’s strength each day to help her overcome her troubles and trials. Her name was Carolina Sandell Berg, and she was born on this day, October 3, l832. She grew up to become Sweden’s most celebrated author of Gospel hymns, and wrote so many that she is often called “the Fanny Crosby of Sweden.”*

Like many Christians, Carolina learned that when pain and tragedy strike, God may use that experience to deepen our faith. When she was 26, Carolina–or Lina (pronounced Lie-nah) as she liked to be called–experienced a tragedy which profoundly affected the course of her life. She was with her father, a Lutheran pastor, crossing a Swedish lake. Suddenly the ship lurched, and before her eyes, her father was thrown overboard and drowned. Lina had written hymns before, but now she poured out her broken heart in an endless stream of beautiful songs. Her hymns mightily influenced the revival that swept across Scandanavia after l850.

The words of Lina Berg’s hymns were all the more popular because of the simple, beautiful melodies written for them, especially those of Oscar Ahnfelt who played his guitar and sang her hymns throughout Scandanavia. Lina Berg once said that Ahnfeld sang her songs “into the hearts of the people.”

Even Jenny Lind, the world-famous concert vocalist, visited factories and sang Lina’s beautiful hymns. In Matthew l2:34, Jesus said: “Out of the abundance of the heart, the mouth speaketh.” Lina Sandell Berg’s voice spoke more than 650 hymns from a heart filled abundantly with love for her Saviour. In one of them, “Day by Day,” she had this to say:

Day by day and with each passing moment,
Strength I find to meet my trials here;
Trusting in my Father’s wise bestowment,
I’ve no cause for worry or for fear.
He whose heart is kind beyond all measure
Gives unto each day what He deems best–
Lovingly, its part of pain and pleasure,
Mingling toil with peace and rest.

Ev’ry day the Lord Himself is near me
With a special mercy for each hour;
All my cares He fain would bear, and cheer me,
He whose name is Counselor and Pow’r.
The protection of His child and treasure
Is a charge that on Himself He laid;
“As thy days, thy strength shall be in measure,”
This the pledge to me He made.

Help me then in eve’ry tribulation
So to trust Thy promises, O Lord,
That I lose not faith’s sweet consolation
Offered me within Thy holy Word.
Help me, Lord, when toil and trouble meeting,
E’er to take, as from a father’s hand,
One by one, the days, the moments fleeting,
Till I reach the promised land.

* Fanny Crosby was a blind American hymnwriter who wrote the equivalent of seventeen books of hymns.