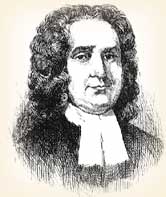 Thud. The whip’s three cords slammed onto the bare back of Obadiah Holmes, who stood tied to the post. Thud… Thud… Thud. Thirty times the executioner struck with all his force. It was on this day, September 5, 1651 in Boston, Massachusetts.

According to witnesses, Obadiah did not groan or scream. Instead, he preached to the crowd. When the whipping was over, he said, “You have struck me as with roses.” To observers, it was obvious that he was badly wounded. As a matter of fact, he was so hurt that he had to stay in Boston for several weeks while he recovered, and could only eat while kneeling on his elbows and knees.

How could he take this punishment so bravely? Obadiah was filled with joy because he considered that the Lord Jesus Christ had counted him worthy to suffer for the sake of truth. The beating came about because he crossed into Massachusetts from neighboring Rhode Island merely to help a sick old man and held a Baptist service in a private home in Puritan New England. Arrested with him were the Rev. John Clarke and another man. If Obadiah had been willing to pay a fine of 30 pounds he could have escaped the whipping. (30 pounds was a large sum of money for a poor man in those days; Obadiah’s whole estate at his death was valued at only 130 pounds.) But he was so sure that he was right that he even refused to help his persecutors to unbutton his shirt, much less pay the unjust fine.

Like the majority of inhabitants in New England, Obadiah was an immigrant from England. He did not become a Baptist until he settled in Massachusetts. Unable to bear the civil restrictions in Salem, he moved to Rehobath. There his teaching split the local church and he became leader of a small Baptist group. The colony’s leaders ordered him “to desist, and neither to ordain officers, nor to baptize, nor to break bread together, nor yet to meet upon the first day of the week…” And so Obadiah and his wife moved to Rhode Island, setting up house for the third time since coming to America.

To the very end, Obadiah kept his eyes on the things of God. He had nine children and 42 grandchildren when he died. Seven years before the end, he wrote urging them to remember the meanings of their Bible names, given to them to help them stick fast to Christ. He urged them to square their lives with scripture and to meet, support, strengthen, and reprove one another.

Obadiah’s testimony lived on long after the punishment was past. Henry Dunster was one of the best-educated men in Massachusetts when he was given the job of founding Cambridge College (now Harvard University). When it appeared to him that the state could not answer the claims of John Clarke, Obadiah Holmes and Mr. Crandall, he studied his Bible and came to the conclusion that the persecuted men were correct. Shortly afterwards, he publicly refused to have his own newborn child baptized. Because of this he was dismissed from the leadership of Harvard.

In Boston itself, Obadiah’s suffering impressed others who established a Baptist church there, regardless of the colony’s disapproval. Holmes’ Last Will and Testimony is a highly regarded piece of Baptist exhortation.

The Seven Things Jesus Said on the Cross! »
« A More Sure Word of Prophecy