Cameron Townsend Resolved to Do God’s Will 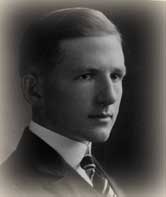 Cameron Townsend had to rethink matters. “You are all cowards,” Stella Zimmerman had barked. “There are a million men going off to war, yet you two are leaving us women to do the Lord’s work alone!”

The young man had grown increasingly aware of God calling him to spread the gospel to those who had never heard it. He had even signed up to be a Bible colporteur in Guatemala. But when the US declared war on Germany, it looked as if he would be drafted, since he was in the National Guard. As a patriot he was eager to go. Stella’s words checked him. He decided to ask for a deferment. “Go,” said his captain. “You’ll do a lot more good selling Bibles in Central America than you would shooting Germans in France.”

And so, on this day August 18, 1917, Cameron Townsend and a spiritually-minded buddy said good-bye to friends and family at the Los Angeles train station and headed for San Francisco to take a boat to Central America. In San Francisco they encountered delays in finding a ship. They seized the opportunity to make a little more money to support themselves in their coming adventure. It was almost a month later before the two sailed for the mission field.

Cameron found the work difficult. At times he almost despaired of going on. He was revolted by the food, unable to communicate, homesick, and heat sick. Despite all, he threw himself on the Lord and persisted.

Soon he realized how desperately the Indians needed the gospel in their own languages. In 1918 he made up his mind to translate the scriptures into the very difficult Cakchiquel language. He began the work with few tools. Overcoming great obstacles, he learned the language, wrote it down and turned the gospel into it.

His own difficulties were the birth of a vision for him. The upshot was that he and friends founded the Summer Institute of Linguistics. It was designed specifically to teach new missionaries how to break and translate languages. It became Cameron’s goal to have someone translate each of the languages of Mexico. Eventually he won support from the Mexican government. As missionaries began to multiply, Cameron found it necessary to create a mission organization, the Wycliffe Bible Translators. It grew into what is reportedly the world’s largest mission.

One old chief asked “Cam,” “Why haven’t you come sooner . . . . We have been wondering what sin we committed against God that kept him from sending you to us.” Said Townsend, “The fault is not theirs. God has sent but we have refused to go.” But thanks to Townsend and others there is now more translation of the Bible going on right now around the world than all previous centuries of Christian history combined.