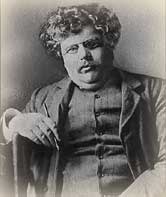 Mr. Chesterton Made His Confession

“How in blazes do you know all these horrors?” cried Flambeau [a criminal in one of Chesterton’s fictions].

The shadow of a smile crossed the round simple face of his clerical opponent. “Oh, by being a celibate simpleton, I suppose,” he said. “Has it never struck you that a man who does next to nothing but hear men’s real sins is not likely to be wholly unaware of human evil?”

Chesterton wielded one of the great pens of his day. His Father Brown detective stories are as delightful to nibble as cinnamon apples. Renowned in literature, Chesterton was also a passionate and humorous apologist for the Christian church. Especially the Catholic church. As a young man he showed considerable literary talent and began to edit a little paper. In time this became his life’s work. He did a lot of criticism. He had an uncanny knack of seeing what was crucial in any author’s work and the clarity to smell the real worth or the real flaw of any argument.

Paradox was his forte. Paradox, said Chesterton, “is truth standing on her head to attract attention.” As used by Chesterton paradox is either a statement that at first glance seems false but actually is true, or a “commonsense” view exposed as false. He used it so frequently it could become tiresome in his longer works. But in short essays it is scintillating and refreshing. Here is an example on the topic of history from The Everlasting Man, his paean to Christ which shows that the spiritual is more real than those things we consider tangible reality. “So long as we neglect [the] subjective side of history, which may more simply be called the inside of history, there will always be a certain limitation on that science which can be better transcended by art. So long as the historian cannot do that, fiction will be truer than fact.”

Chesterton could be absent-minded. Once he dropped a garter. While down on the floor groping for it, he found a book and began to read it, the garter completely forgotten. He would stand in the middle of traffic, lost to his surroundings, deep in thought. Still, he had tremendous concentration for writing and was ever fixed on the eternal truths that make the wisdom of this world foolish. Thus he could say succinctly of the agnostic George Bernard Shaw, “He started from points of view which no one else was clever enough to discover and he is at last discovering points of view which no one else was ever stupid enough to forget.” His witticisms were repeated everywhere.

On this day, Sunday, July 30th, 1922, Chesterton took a walk with Father O’Connor. His 400 pounds were to be baptized into the church that he had defended all his life. Looking for his prayer book he accidentally pulled out a three penny thriller instead. At last he found the text and made his first confession. Asked why he joined the Catholic church Chesterton replied, “To get rid of my sins.”

G.K. Chesterton wrote some of the most entertaining books on Catholicism and life (The Everlasting Man) ever. While I disagree with many of his views on doctrine I can enjoy his humor filled thought provoking style, – Mike

For more on G.K. Chesterton see: Who is this Guy and Why Haven’t I Heard of Him?

Quicken ME »
« Is Calling on the Lord’s Name All It Takes to Be Saved?