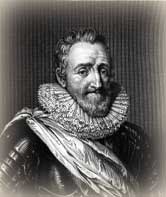 Henry IV “The Great” remains the most popular of the French kings. However, there was time when it was doubtful he could take the throne. The chief difficulty lay in the fact that he had been reared a Protestant (French Huguenot) in a nation whose majority was Roman Catholic.

Henry escaped the St Bartholomew Day massacre (in which Catholics butchered several thousand Protestants) by renouncing Protestantism. Held captive by the French royal family, he escaped, rejoined the Protestants and led them to successful victories. Meanwhile, deaths made him legal heir to the French throne.

However, the pope had excommunicated Henry for his religious views. French Catholics might have appreciated his flair, but were unwilling to see a “heretic” on the throne. The Catholic league had even passed a law that barred Henry from the throne.

Moderate Catholics, recognizing that Henry was the only person with a real hope of governing the war-torn country urged him to renounce his childhood faith and become a Catholic. Henry replied that one’s religion was not as easily changed as ones shirt. Nonetheless, he talked with his advisors, and they assured him that one could be saved as truly in the Roman Church as under the Calvinism in which he had grown up.

Four and a half years passed between the day the throne became vacant and Henry’s announcement that he would convert to Catholicism. In July 1593, he made his way to Saint-Denis to speak with a score of Catholic bishops and theologians who helped him resolve his remaining questions. His last objections removed, Henry abjured Protestantism on this day, July 25, 1593.

Dressed in white satin, the heir to the throne marched through the hot streets of Saint-Denis, accompanied by trumpeters, a Swiss guard and many nobles. The crowds shouted “vive le roi!” as he passed. At the basilica of Saint-Denis, an archbishop met him and heard him ask to be received into the communion of the catholic, apostolic Roman Church.

“Do you truly desire it?” asked the archbishop.

“Yes, I wish and desire it,” said Henry. Popular legend also has him say at some point, “Paris is worth a mass.” This is probably fiction.

Still, Henry’s problems were not over. The pope wanted to make an example of him and refused to remove his excommunication without humiliating penances. However, political dangers and King Henry VIII of England’s break with the Catholic church, brought the pope to a more reasonable attitude.

When Henry became king, he issued the Edict of Nantes, protecting the rights of his former Protestant allies. He adopted policies which for the most part brought peace and prosperity to France. The chief blot on his character was his passion for mistresses. He was assassinated by a dagger-wielding fanatic seventeen years after his famous abjuration.

Who Would Be First »
« Did Christ Promise Us Supernatural Power and Protection?